Bahraini activist jailed and fined for tearing up king's photo

Zainab al-Khawaja sentenced to three years in jail and fined her 3,000 dinars ($7,950) for insulting King Hamad by tearing up his photograph 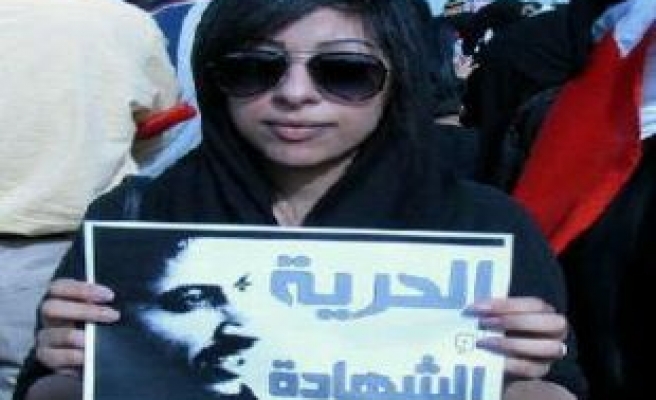 A Bahraini court sentenced pro-democracy activist Zainab al-Khawaja to three years in jail and fined her 3,000 dinars ($7,950) on Thursday for insulting King Hamad by tearing up his photograph, her lawyer and a human rights group said.

Bahrain has been in turmoil for three years since mass protests erupted in Manama, inspired by the 2011 Arab Spring uprisings and led by Shi'ite Muslims. Khawaja has become known for publishing news of the demonstrations on social media.

Khawaja, who gave birth to a son last week, is the daughter of jailed activist Abdulhadi al-Khawaja and her younger sister, Maryam, acting head of the Bahrain Centre for Human Rights, was jailed in absentia on Monday for assaulting two policewomen.

She is free on bail of 100 dinars and her sentence was suspended pending an appeal, her lawyer Mohammed Al Wasati said.

Khawaja tore up the photograph on Oct. 14 during an appeal hearing into two cases involving her dating back to 2012. Amnesty International says Bahrain's High Criminal Court will shortly issue verdicts in other cases against her, including one in which she is accused of insulting a police officer.

Shi'ites in Bahrain complain of political and economic marginalisation, a charge the government denies. Talks between the government and opposition have failed to defuse tensions.

Khawaja's sentencing coincided with a visit to Bahrain by U.S. Assistant Secretary of State for Democracy, Human Rights and Labour Tom Malinowski, but there was no immediate U.S. comment on the case. The news of the sentencing emerged as he held a news conference, where the matter was not raised.

King Hamad approved the law in February imposing a jail sentence of up to seven years and a fine of up to 10,000 dinars for anyone who publicly insulted him.

Malinowski thanked Bahrain, a base for the U.S. Navy's Fifth Fleet, for taking part in U.S.-led air strikes against ISIL militants and praised progress he said the government had made in internal reconciliation efforts.