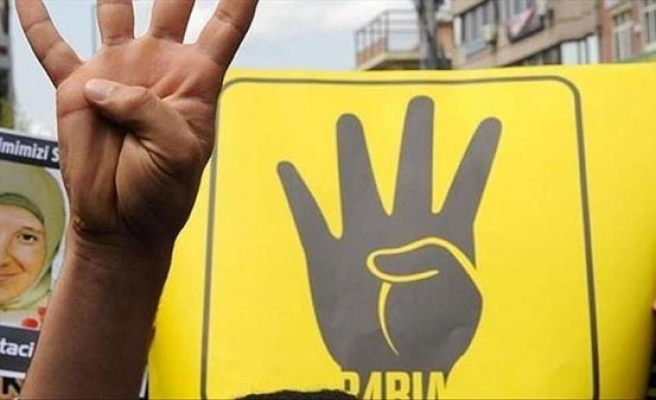 An Egyptian government move to outlaw a four-fingered salute -- used by supporters of ousted President Mohamed Morsi to commemorate hundreds of demonstrators killed in 2013 -- has failed to discourage protesters.

"Whether they criminalize it or not, we’re going to use the Rabaa salute to remember our dead," Hussein, a university student who declined to give his last name, told Anadolu Agency.

Last week, the Egyptian cabinet approved a draft law aimed at criminalizing the promotion and the distribution of stickers, posters or photographs that allegedly promote "terrorist" groups.

The Rabaa symbol -- a hand with four fingers extended -- has been used by anti-regime protesters to express their opposition to President Abdel-Fattah al-Sisi, a former army chief who ousted Morsi in a 2013 coup.

Shortly after Morsi’s ouster, on Aug. 14, 2013, hundreds of his supporters were gunned down when security forces violently cleared their sit-in protest, which was held in eastern Cairo's Rabaa al-Adawiya Square.

Ever since, the hand gesture has been a common feature of pro-Morsi anti-coup demonstrations in Egypt.

The Egyptian authorities, for their part, say protesters who give the four-fingered salute are members of Morsi’s now-outlawed Muslim Brotherhood group.

The Egyptian government banned the Brotherhood in late 2013 and declared it a "terrorist organization."

Since Morsi's overthrow, Egyptian authorities have waged a harsh crackdown on his supporters and members of his Muslim Brotherhood group, killing hundreds and arresting tens of thousands.