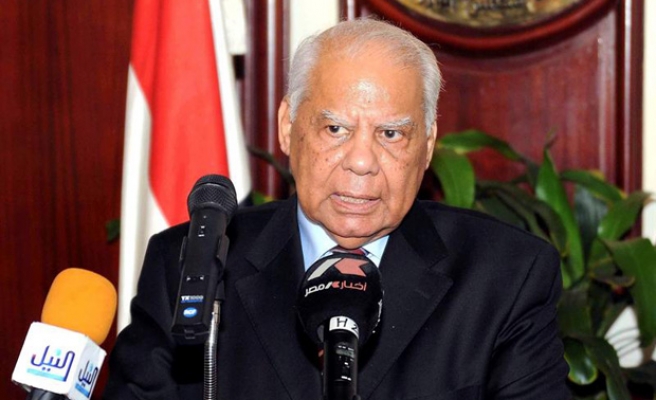 Biblawi stated that the new cabinet would consist of 2 consultants and around 30 ministers adding he would start meeting the candidates starting from Sunday.

The name of the Information Ministry will be changed as 'The Ministry of Social Solidarity', he added.

Palestinian and Tunisian support for Morsi

Palestinians living in Israel protested against the military coup in Egypt that ousted the country's first democratically elected president Mohammad Morsi on July 3.

'1948 Palestinian Islamic Movement' organised the protests during which Palestinians chanted pro-Morsi slogans and carried banners reading "Morsi is the legal leader of Egypt" and "The coup in Egypt is a plan of the West".

"Palestinians came together to support the legitimacy that Morsi stood for. No one can steal Egypt after Arab Spring," said head of 1948 Palestinian Islamic Movement Shekih Raed Salah, "If Egypt happens to be devastated, then it means Masjid Al Aqsa will no longer exist."

On the other hand, hundreds of people rallied in central Tunisia and chanted slogans against Army chief General Abdel Fattah al-Sisi upon the call of Ennahda Movement.

Prominent leaders of the party also joined the protests including Ennahda Movement head of the political bureau Amir Al-Urayyid.

"It is impossible that Tunisia face the things happening in Egypt now. No call except for legitimacy can be admitted," said Urayyid.

During the protests which started on June 30 when the army ousted Morsi, 149 people died and thousands got injured, according to the data gathered by Anadolu Agency from the health ministry and the officials in Egypt.

84 pro-Morsi protesters were killed outside the Republican Guards headquarters on July 8.

Cairo ranked the first with the highest number of casualties followed by Alexandria, Sinai and other cities in the country.

'Military coup in Egypt was a severe blow to democracy process'

Dr. Muhammad Imara of Al-Azhar in Cairo described the things happening in his own country as 'a severe blow to democracy process' which he said started with the revolution on January 25.

Stating the military coup would take Egypt to 60 years before, Imara said, "The existing coup is invalid, and anything built on invalidity will be invalid as well."

Following the dissolution of the Islamist-led Shura Council (parliament upper house) after military coup, deputies called on all the parliaments around the world to support Egyptian people against coup.

"We affirm that Egypt’s constitution is still in effect, and that the military council can’t halt the constitution which the Egyptian people agreed upon in a fair and free referendum," read the statement made by Shura Council MPs Saturday, where they gathered at the pro-Morsi sit-in in Rab'a Al-Adaweya Square in Cairo.

Speaking to Anadolu Agency (AA), chairman of the Shura Council Ahmed Fahmy said, "We can overcome the crisis in the country only if we return to the constitutional legitimacy. Then we can start the dialogue, and later there will be no harm in talking about the early elections."

His opinions were shared by another Ikhwan leader Mohammed Baltaci who said "Early elections are possible on condition that the democratically elected president takes office again and the constitution come into force."

The struggle was not for Morsi but for consitutional legitimacy, Baltaci told AA, "We aim to stop junta in the country. "

"The army has one-way negotiations which are based on arrests, killing, and charges on people, not based on politics," he said.

"We have received letters of complaints about Mohammed Morsi and the leaders of Muslim Brotherhood (Ikhwan) that they kill and provoke the peaceful protesters, spy for foreigners, destroy the country's economy, attack the military posts, carry explosive materials, and harm the safety as well as the unity of the country," said the written statement by Egyptian Attorney General's office.

The letters will be assessed and the final decisions will be made following the investigation, the statement said also said.