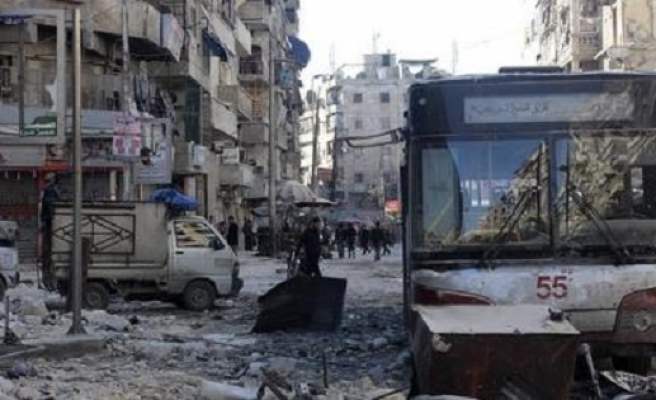 A bomb tore apart a bus thought to be carrying Lebanese Shi'ite Muslim pilgrims in Damascus on Sunday, killing at least six people and wounding 19 in a rare attack at the centre of the Syrian capital, a Reuters witness and local media said.

A social media account linked to al Qaeda's Nusra Front said the group was behind what it described as a suicide attack on the bus near a market place.

The vehicle had Lebanese number plates and Syrian security services had cordoned off the area close to Hamidiyeh market, the Reuters witness said. Rescue workers sifted through the rubble and cleared away pools of blood from the ground.

Syria's state news agency SANA said the "bombing" involved five kilograms of explosives placed in the front of the bus and that authorities had defused a second device inside a bag which was found on the floor of the vehicle.

Earlier on Sunday Prime Minister Wael al-Halqi told parliament that Syria aimed to "flush out all terrorists" in 2015.

The bus had been carrying pilgrims close to the Sayyida Ruqayya shrine, a television channel run by Lebanese Shi'ite movement Hezbollah said.

Hezbollah has sent thousands of fighters over the border to support Syrian government forces battling an insurgency which has drawn in countries across the Middle East and stoked sectarian tensions.

Syria's Ikhbariya television showed footage of men and a woman in hospital with wounds. It also showed video of the blackened, wrecked bus and security services picking through the damage.

The Nusra Front Twitter feed said one of the group's members blew himself up inside a bus at the market. It posted a photo of a man it said was the bomber and another of the wrecked vehicle. Reuters could not immediately verify the images.

Nusra Front has been battling the Syrian military as well as other insurgent groups in Syria. While fighting has raged on the outskirts of Damascus, attacks in the centre are not common.

In a speech to parliament broadcast on state television, Prime Minister Halqi said Syria would "back any initiatives to fight global terrorism".

Hours before the attack, he said Syria would not allow its enemies "to destroy the land of religions and cradle of civilisations".