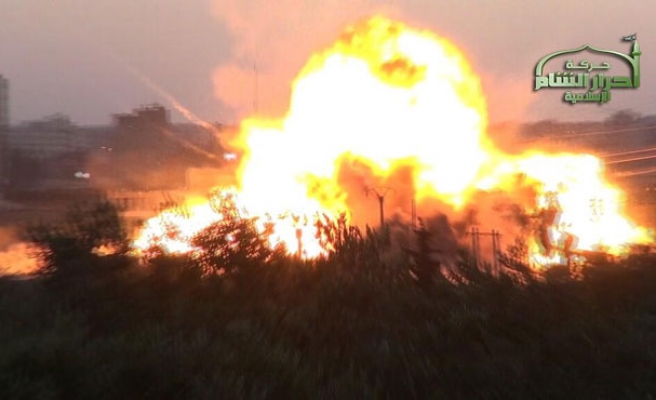 About 30 Syrian government fighters were killed when rebels set off a bomb in a tunnel beneath a checkpoint in a northwestern province, activists said on Tuesday.

Videos and images posted by opposition supporters online showed a massive plume of smoke and earth shooting into the air near a small town as men shouted "Allahu akbar" (God is greatest).

Rebels fighting to overthrow President Bashar al-Assad regularly carry out guerrilla attacks against his forces, but the size of the blast, which occurred on Monday, was unusual.

The Syrian Observatory for Human Rights, a Britain-based monitoring group, said the blast took place outside the town of Ma'arat al-Nu'man in the northwestern Idlib province.

At least two officers were among those killed when rebels from the Islamic Front and the Shields of the Revolution Council set off tonnes of explosives in a tunnel running from the road to the checkpoint, the group said.

More than 150,000 people have been killed in the three-year-old rebellion, which started as a peaceful protest movement and turned into a civil war after a government crackdown.

International powers have been deadlocked over how to resolve the conflict, further complicated by infighting between rebel groups that has killed thousands of fighters this year.

On Monday about 70 rebels were killed in clashes between the Islamic State of Iraq and the Levant and the Nusra Front, and its allies in an eastern province bordering Iraq, the Observatory said.

The fighting, which has intensified in the last few weeks, centres around villages on the outskirts of the city of Deir al-Zor, capital of the oil-producing province of the same name, where rebel groups have been fighting each other for control of oilfields and strategic areas.

The latest clashes has displaced tens of thousands of people in the area over the last few days, the Observatory said. Five civilians were killed in Monday's fighting, which resulted in the Nusra Front and its allies taking control of the village of al-Sabha, it said.