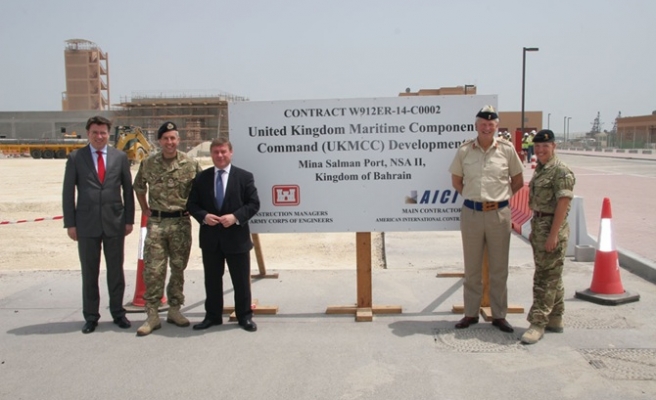 Construction work has begun in Bahrain to build Britain's first permanent military base in the Middle East since 1971, amid security threats in the region, Bahrain's state media reported Sunday.

"The ground-breaking ceremony for the establishment of the marine facilities headquarters in the kingdom of Bahrain" was launched on Saturday, the official BNA news agency.

Hammond tweeted on Saturday that "work starts today on new  Royal Navy base at Mina Salman Bahrain," and said the new base "is a symbol of UK's enduring commitment to Gulf security".

The new base is part of a deal reached last year between the two countries to increase cooperation in tackling security threats in the Middle East.

Bahrain -- which is part of a U.S.-led coalition that has been carrying out air strikes on the Islamic State group in Iraq and Syria -- is already home to the U.S. Navy's Fifth Fleet.

Britain is part of the U.S.-led coalition but takes part only in air strikes on Iraq, with its warplanes taking off from the Royal Air Force base at Akrotiri in Cyprus, where it also has a second garrison.

The new base in Bahrain "will enable Britain to send more and larger ships to reinforce stability in the Gulf," British Defence Secretary Michael Fallon said last year.

Sheikh Khalid, quoted by BNA, said the construction of the new base was expected to "strengthen the partnership between the two countries and enable the forces to carry out their duties effectively".

Construction of the base will cost £15 million ($23 million, 19 million euros) and, according to Bahrain's Al-Wasat newspaper it should be completed next year.

Britain withdrew from bases in the Gulf in 1971, in a move that led to the independence of Bahrain and Qatar and the creation of the United Arab Emirates.