The Muslim Brotherhood denied an Al-Ahram report which said there was "general agreement" that an initiative proposed by former premier Hisham Qandil could be a basis for dialogue. 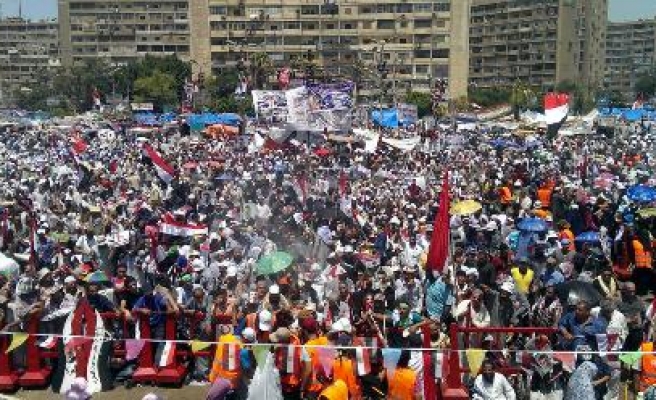 The Muslim Brotherhood on Friday denied a media report that it was holding negotiations with the army to halt protests against the July 3 ouster of elected president Mohamed Morsi.

State-run daily Al-Ahram had reported earlier that the Muslim Brotherhood and the army were in talks to halt ongoing protests demanding the ousted president's reinstatement.

Citing sources, Al-Ahram said on its website that there was "general agreement" that an initiative proposed by former premier Hisham Qandil could be a basis for dialogue.

"This report is baseless," MB spokesman Ahmed Aref said in a statement, a copy of which was obtained by Anadolu Agency.

"Our stance is clear: the military coup must end, unconstitutional measures be revoked and legitimacy restored," he said.

On Thursday, Qandil unveiled a three-point initiative based on "a commitment to legitimacy and listening to the people's voice at every step."

It called for easing tensions between all parties, agreeing on principles aimed at fostering national reconciliation, and discussing a new roadmap for Egypt's short-term political future.

Morsi, Egypt's first democratically elected president, was ousted by the army on July 3 amid mass demonstrations against his regime.

The army suspended the constitution and installed Adly Mansour, the head of Egypt's constitutional court, as interim president.

Since his ouster, Morsi supporters have been staging daily mass demonstrations and sit-ins to denounce what they call a "military coup" against the elected president.

The National Alliance for the Defense of Legitimacy, a coalition of largely of Islamist groups and figures, is organizing mass pro-Morsi rallies on Friday.

Army chief Abdel-Fattah al-Sisi has, for his part, urged Egyptians to take to the streets today to give him a mandate to "confront violence and terrorism."