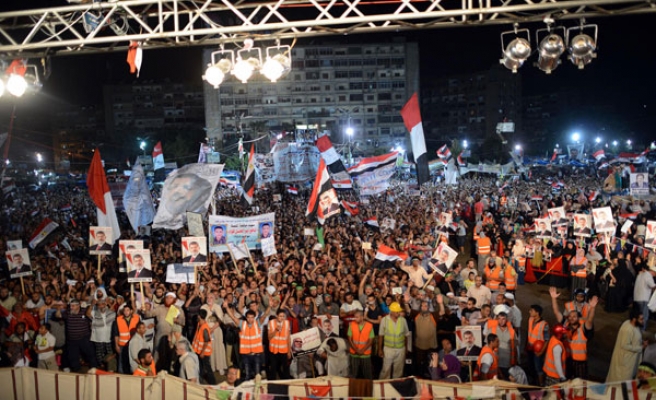 A Muslim Brotherhood spokesman has said that he met with European Union envoy Bernadino Leon at Cairo's Rabaa al-Adawiya Square, the seat of a round-the-clock sit-in by backers of ousted president Mohamed Morsi.

"We toured the square to make sure there were no weapons or tools for committing violence in the place," he added.

Haddad said the meeting with the EU envoy had tackled "general issues."

"We told him that we were determined to reject the status quo and that there was no alternative to democratic legitimacy and the protection of freedoms in Egypt," he added.

He is also scheduled to meet representatives of the Tamarod movement, which championed last month's protests that culminated in Morsi's ouster.

The source did not rule out that the EU envoy might also meet Defense Minister Abdel-Fattah al-Sisi.

In a statement issued by ElBaradei's office, the vice-president said he would meet with the EU envoy "to discuss scenarios that can contribute to reaching a national solution to the current crisis in a way that meets the aspirations of the Egyptian people and fulfills the demands of the revolution in achieving real changes that put the country on the track of multi-party democracy."

The statement added that Leon's visit "comes to follow up on the efforts of EU foreign policy chief Catherine Ashton during her recent visit to Egypt."

On Tuesday, Ashton concluded her second visit to Egypt in less than two weeks.

Speaking at a joint press conference with ElBaradei, Ashton underlined the need to include all parties in Egypt's political process.

She promised to return to Egypt soon to assist in the country's democratic transition.

The top European diplomat had earlier confirmed that she had met with Morsi, who was ousted by the army on July 3 after mass protests against his regime.

Ever since his overthrow, thousands of pro-Morsi demonstrators have been staging daily protests and sit-ins to defend his "democratic legitimacy" and demand his reinstatement.