"Our village has not enjoyed Eid this year because of president Morsi's fate," Shokri al-Sayed, 45, a tractor driver said. 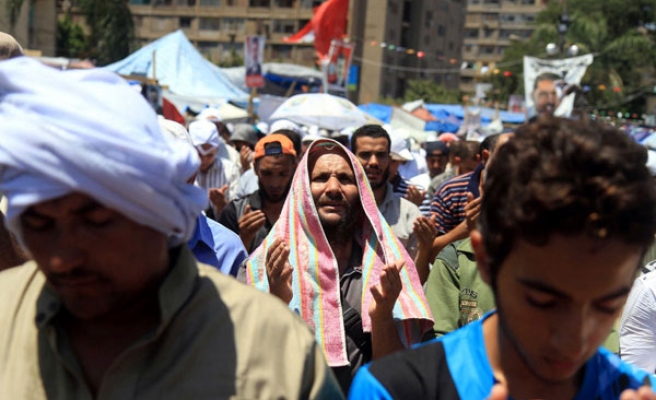 During this year's Eid al-Fitr, a state of sadness prevails in ousted President Mohamed Morsi's hometown in the Nile Delta governorate of Sharqiya.

"We don't feel the Eid cheerfulness; it's a sad Eid," Khairya Abdel-Daem, 25, a housewife from Al-Adawa village, told Anadolu Agency.

"How can they detain a gentle and good person like him?" she said of the ousted leader.

Morsi, Egypt's first democratically elected president, was removed from power by the powerful army on July 3 after mass protests against him.

He has not been seen in public since his ouster and his whereabouts remain unknown to the public.

Abdel-Daem, a niece of Morsi, said the ouster of the elected leader had left village residents in a state of grief.

"Our sorrow can't be described because of the detention of an elected president without a fair investigation," she said.

Egyptian authorities have ordered Morsi detained for 15 days on charges of "conspiring" with the Gaza-based Hamas movement to carry out "hostile acts" inside Egypt.

Morsi also faces charges of involvement in attacks on police facilities and personnel, helping prisoners – including himself – escape from jail, sabotaging public property, and abducting security officers and soldiers.

"How can they bar his neighbors from visiting him or knowing where he is being held, while allowing the family of [former president Hosni] Mubarak – who ruined the country for 30 years – to visit him and inquire after him," Abdel-Daem asked.

"We won't be silent about this," she added. "God does not sanction injustice and Morsi will emerge victorious, God willing."

Grief is evident on the faces of many villagers in the deposed president's hometown.

"Our village has not enjoyed Eid this year because of president Morsi's fate," Shokri al-Sayed, 45, a tractor driver, told AA.

He lamented that the elected president had been removed from power and put under arrest even though he had been patient with repeated insults by his opponents.

"How can the country's first elected president be detained in this inhumane way?" al-Sayed asked.

"I and my family are very sad. How did we let the legitimate president be humiliated this way?" he asked. "How did we allow him to be ousted and detained without knowing his whereabouts or letting his family inquire about him?"

"Mubarak was not deposed this way," Ibrahim added. "He was admitted to a military hospital and his family was allowed to visit him."

"This is the worst Eid in the history of our village. We have not felt the joy of either Ramadan or Eid," he told AA.

Voicing a common belief, Abdel-Moneim asserted that "hidden hands" had conspired against Morsi during his one year in office, causing frequent electricity cuts aimed at tarnishing his image.

This state of affairs prompted thousands of disgruntled Egyptians to take to the streets on June 30 to demand the elected leader's ouster.

"But we are confident Morsi will survive this test," Abdel-Moneim said.

Ever since his overthrow, Morsi supporters have been staging daily rallies and sit-ins in Cairo and nationwide to defend his democratic legitimacy and demand his reinstatement.