UN observers' mandate ends on Friday, but the United Nations' 15-nation Security Council is set to decide later on Thursday whether it should be extended for 45 days. 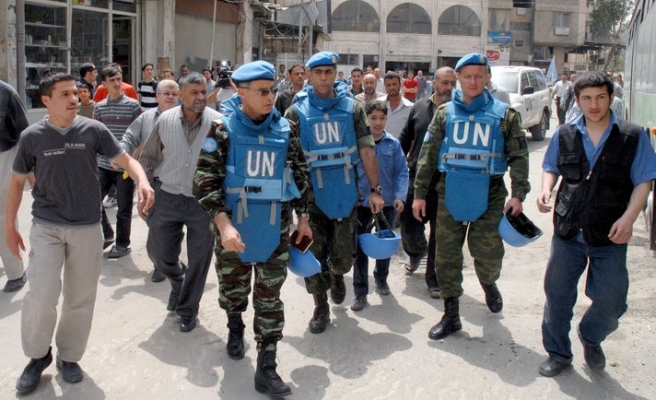 Major General Robert Mood left his hotel in Damascus on Thursday to fly to Geneva after a 90-day U.N. peace monitoring mission to Syria ended, even as battles between forces loyal to President Bashar al-Assad and rebels raged in parts of the capital.

The observers' mandate ends on Friday, but the United Nations' 15-nation Security Council is set to decide later on Thursday whether it should be extended for 45 days.

"I leave satisfied that I, and some 400 brave women and men, have done our best, under very challenging circumstances," Mood, who led the U.N. mission, told a news conference in the Dama Rose hotel.

"Government and opposition must be willing to make the necessary concessions and sit at the negotiating table," he added, saying there was no hope for the crisis to be resolved through fighting.

Separately, U.N. Secretary-General Ban Ki-moon said on Thursday he was alarmed by the intensifying violence in Syria, saying he strongly condemned the bombing in Damascus on Wednesday that killed the Syrian defence minister and President Assad's brother-in-law.

Mood's farewell speech came as the U.N. Security Council was preparing to vote later on Thursday on a Western-backed resolution that threatens Syrian authorities with sanctions and is aimed at ending the 16-month conflict.

Russia, a key ally of Syria, has refused to engage in negotiations on the resolution that would extend the U.N. observer mission in Syria for 45 days and place envoy Kofi Annan's peace plan under Chapter 7 of the U.N. Charter, diplomats say.

U.N. monitors, who have been unable to halt the violence, suspended patrols in June after repeated attacks on convoys.