Children play in the streets of Yarmouk as ceasefire starts

Al-Nusra Front agreed last week to hand over its position of authority in the camp to Palestinian armed groups. 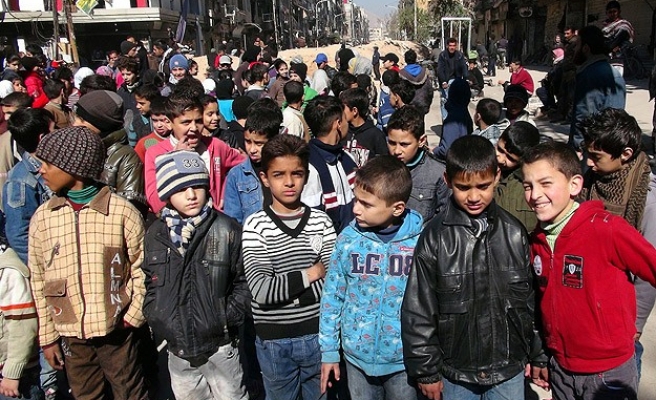 Sounds of cheering and hearty laughter echoed Friday at the Yarmouk Palestinian refugee camp in Syria, where 100 people starved to death during a 217-day siege by forces loyal to embattled President Bashar Assad.

Shut indoors for months due to the regime's airstrikes, children took to the streets to play tug of war on Friday morning, as the United Nations (UN) resumes efforts to deliver relief material to the camp after gaining access last month.

Yarmouk camp, located south of capital Damascus, was set up in 1957 for Palestinians who fled the 1948 Arab–Israeli War which resulted in the creation of the self-proclaimed Jewish state.

Currently, around 18,000 people live in the camp, which has remained under siege by Syrian regime forces and pro-regime militias since last September. Most of those seeking shelter there are Palestinian women and children.

Some 100 camp residents have already died of starvation or diseases related to malnutrition, according to statements issued by a coalition of 40 Syrian opposition groups.

In January, the United Nations Relief and Works Agency for Palestine Refugees was able to enter the camp for the first time to distribute food supplies after having demanded access to the besieged camp for weeks.

Al-Nusra Front agreed last week to hand over its position of authority in the camp to Palestinian armed groups.