“Chlorine has probably been used in a systematic manner in a number of attacks,” said Dr. Oliver Meier, an associate at the German Institute for International and Security Affairs (SWP). 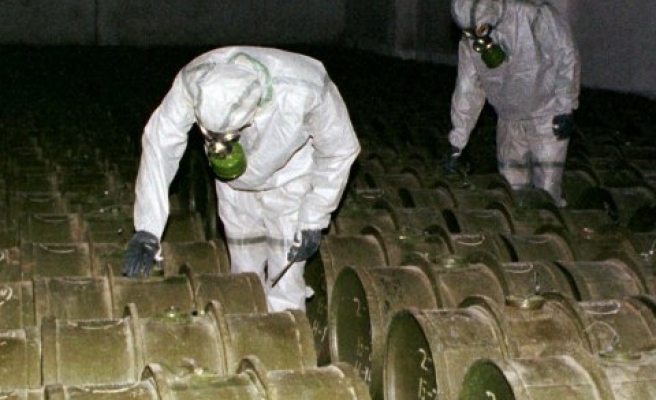 Arms control experts warned the international community Wednesday to guard against the future use of chemical weapons by the Syrian regime, three days after the last shipment supposedly left the country.

Dr Oliver Meier, an associate at the German Institute for International and Security Affairs (SWP), said it was difficult to be sure all of President Bashar al Assad’s chemical weapons had been removed and highlighted government forces’ use of chlorine in barrel bombs.

On Monday, the Organization for the Prohibition of Chemical Weapons (OPCW) declared all chemical weapons material has been destroyed or removed from Syria.

Meier said: “It is important that the international community keeps up the pressure so that any future use of chemical weapons can be investigated.”

A comprehensive monitoring regime can only be established once the civil war has ended, he added.

Meier said an OPCW team tried to investigate the use of chlorine, which is prohibited by the Chemical Weapons Convention, in May but was prevented from getting to the site of the alleged attack.

“But it concluded in its report published June 16 that the allegations were credible and that chlorine has probably been used in a systematic manner in a number of attacks,” he continued.

"Such an investigation would hold the perpetrators to account as well as deter future attacks."

In a statement on Monday, the Arms Control Association’s Executive Director Daryl G. Kimball said the risk of further large-scale chemical weapon attacks in Syria had been “severely reduced” and that Syria’s ability to produce chemical weapons had been “verifiably destroyed”.

“But the work of the OPCW in Syria is not yet complete,” he added. “Unfortunately, the Assad regime appears to be using chlorine in barrel bombs dropped from military helicopters on civilian areas.”

“While less destructive and deadly than Sarin, these attacks are violations of the Chemical Weapons Convention and are war crimes that must end.”

Sigrid Kaag, leader of the OPCW mission in Syria, declared her unit would continue to check Assad’s chemical weapon inventory. Chlorine was absent from the inventory passed to investigators by the regime.

Chlorine was first used as a chemical weapon during World War I. It causes respiratory failure when of a high enough concentration.

Syria accepted a OPCW removal plan in 2013 following an alleged chemical gas attack in which nearly 1,500 civilians, including women and children, died in the Ghouta suburbs of the capital Damascus on August 2.

Syria has been gripped in an ongoing civil war since 2011. More than 100,000 people have been killed and almost half of the population displaced, according to the United Nations.