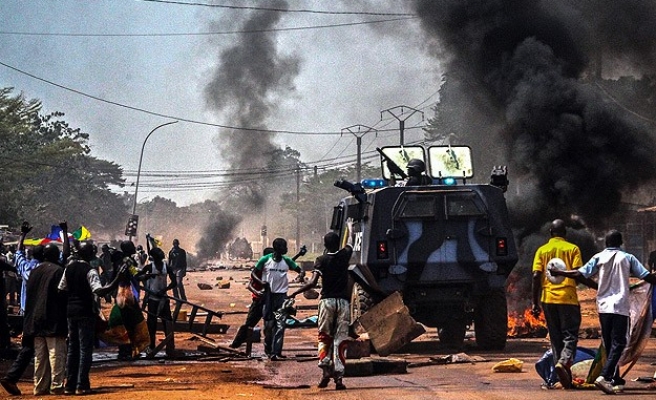 "We were escorting a truck carrying Chadian nationals fleeing Bangui when a mob of Christians attacked us," a Chadian soldier serving in African peacekeeping force MISCA told Anadolu Agency on Friday, declining to give his name as he was not authorized to talk to the media.

"We called for backup from MISCA and French troops," he added.

The angry Christians, numbering roughly 300, pelted the peacekeepers with stones.

Others tried to steal luggage from the truck, prompting peacekeepers to open fire on the crowd, injuring two looters and triggering a running battle between troops and the angry mob.

"We can't allow fleeing Chadian nationals to drive through our suburb of Benzville," one Christian youth, stones in hand, told AA.

"They should find an alternative [route]," he thundered. "We shall kill them if they dare cross this road."

Another angry Christian shouted: "This is our country and it's a Christian nation. We don't want Muslims here. They must go back to Chad."

"They supported the seleka rebels and it's time to punish them," he added angrily.

According to an AA reporter at the scene, reinforcements arrived shortly afterward and were able to evacuate the Chadian nationals.

In the months since, the country has been plagued by tit-for-tat sectarian violence between the anti-balaka and former seleka fighters.

In January, Bangui mayor Catherine Samba-Panza was sworn in as new interim president replacing Djotodia, the country's first Muslim president since its 1960 independence from France, after the latter stepped down under international and regional pressure.

Muslims have increasingly been targeted since Samba-Panza, a Christian, assumed the presidency.

In a recent report, Amnesty International said that more than 50 Muslims had been killed by Christian anti-balaka militias in two separate attacks northwest of Bangui.

The rights watchdog said that anti-balaka fighters had stopped a truck transporting refugees in the town of Boyali, some 130km northwest of the capital.

According to Amnesty, Christian militiamen then used machetes and knives to kill their captives – who included three women and three children – in the street outside a local mosque.

The second attack, the rights group said, occurred on January 16 in the town of Bossembele, some 30km north of Boyali, where 25 bodies were found inside a local mosque and another 18 were found strewn in nearby streets.

International humanitarian group Save the Children earlier confirmed the murder of at least 23 Muslims, including three children, in an attack on a refugee convoy.