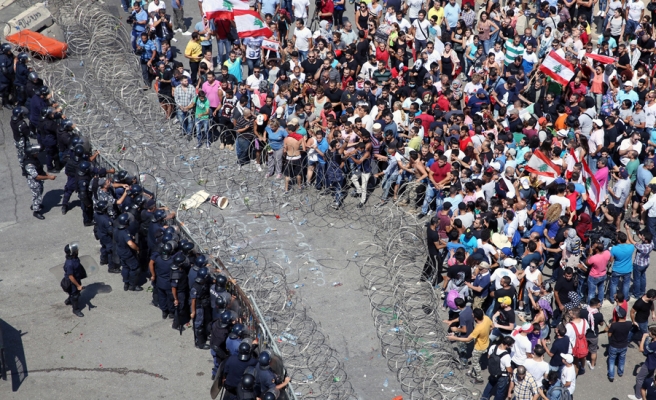 Inside parliament, representatives of the country's political factions were holding a second round of talks aimed at resolving their differences after failing to do so a week ago.

"You Stink," a citizen's group that emerged in protest at rubbish festering in the streets of the capital, had called for Wednesday's new round of dialogue.

"Down with the regime of thugs," shouted angry demonstrators, as some tried to break through the barrier.

Dozens of baton-wielding riot police clashed with the mostly young protesters, making at least 25 arrests, according to organisers.

"Shame on you!" some shouted in response, while others mocked the "dialogue of political trash."

One militant, Wadih el-Asmar, said "they take Lebanese for fools. We have absolutely no confidence in them."

The current political crisis began in July when the Naameh landfill closed, causing rubbish to pile up on Beirut's roadsides, in parking lots and in riverbeds.

"You Stink" emerged as a movement to demand a solution to the environmental problem, but rapidly broadened its target to include the entire political class, which it accuses of being corrupt and inept.

Last week, the government approved a plan to tackle the rubbish crisis, but campaigners said it was too vague and did not meet their demands.

It would involve turning over waste management to municipalities, which would have 18 months to prepare the necessary infrastructure, as well as temporarily reopening Naameh and expanding two other landfill sites in the provinces.

One bloc is led by the Shiite movement Hezbollah, which is allied with Syria and backed by Iran. The other is headed by Sunni former prime minister Saad Hariri, who is supported by Saudi Arabia and the West.

The country has been without a president for more than a year, as a divided parliament has been unable to fill the post despite meeting more than two dozen times.