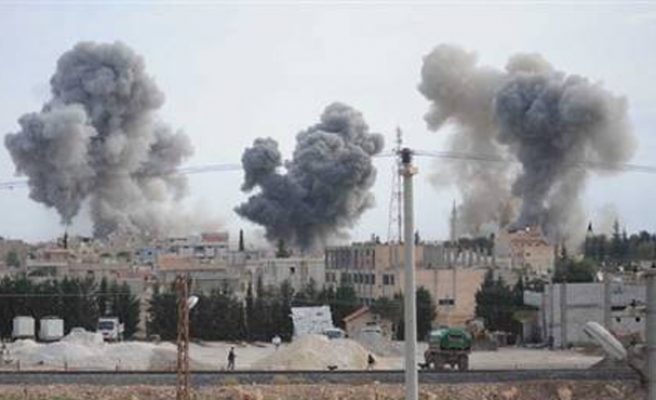 U.S.-led forces launched air strikes on ISIL fighters who are besieging a Kurdish town near the Syrian border with Turkey on Wednesday, Kurdish sources in the town and a monitoring group said, a rare daylight coalition attack.

A Reuters correspondent on the Turkish side of the border could hear jets overhead and saw a column of black smoke rising into the sky from the southeast of the town.

"Today, American jets hit a village that is 4-5 km (2-3 miles) southeast of Kobani and we heard they destroyed one (ISIL) tank," Parwer Mohammed Ali, a translator with the PYD Kurdish group, told Reuters by telephone from Kobani, known as Ain al-Arab in Arabic.

The United States has been carrying out strikes in Iraq against the militant group since July and in Syria since August with the help of Arab allies and Britain. Using mostly night strikes, it aims to damage and destroy the bases and forces of the al Qaeda offshoot that has captured large areas of both countries.

Esmat al-Sheikh, commander of the Kurdish forces defending Kobani, said there were five strikes but that he did not yet know if they were successful. "Jets are still circling overhead," he said by telephone.

The head of the Syrian Observatory for Human Rights Rami Abdulrahman said Kurdish sources on the battlefront reported seeing dead ISIL fighters at the strike sites.