Most delegates had left but a core group remained to continue discussions with opposition figures inside Syria, an activist said. 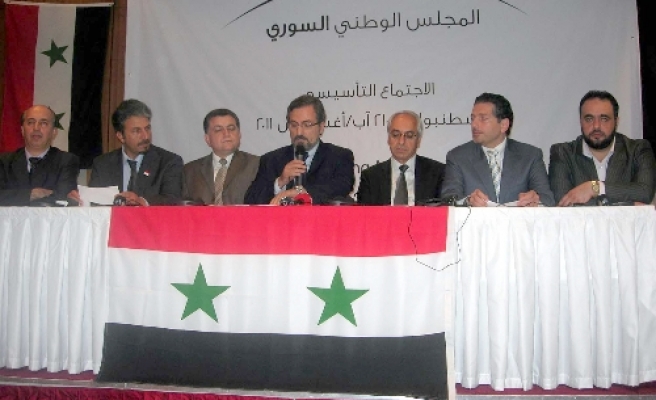 Syrian opposition figures who met in Istanbul to form a broad-based council to represent the uprising against President Bashar al-Assad said on Thursday that they needed more time to consult with activists inside Syria on its composition.

The delay indicates the difficulty in uniting an opposition decimated by decades of Assad family repression, and integrating a generation of younger activists playing a direct role on the ground in street protests facing the brunt of military assaults.

"We need two more weeks to coordinate with the opposition on the inside. All currents need to be represented," Adib al-Shishakly, whose grandfather was an early president of Syria after independence from France in 1946.

Encouraged by international support for their cause, leading opposition figures held lengthy discussions in Istanbul this week to nominate a council that could help with a transition of power if Assad were to be toppled by the five-month uprising against his rule.

Most delegates had left but a core group remained to continue discussions with opposition figures inside Syria, Shishakly said by phone.

Attendees at the conference included Moulhem Droubi, a high-level member of the Syrian Muslim Brotherhood; Sheikh Muteih al-Butain, a leader of the street protests in Deraa that helped ignite the uprising; former political prisoner Khaled al-Haj Saleh, scion of a leftist political family; and writer Hazem Nahar, who was imprisoned during the uprising and managed to leave Syria.

Another delegate said more work was needed to convince sceptical activists inside Syria how the proposed council would further the cause of the uprising and bridge differences over the posts assigned to different groups and how different factions should be represented.

"I think a consensus is developing that a council is needed and its credibility will be boosted by as much support from the inside," said the young delegate, who recently fled Syria and did not wish to be identified.

A statement by the participants said the proposed council was designed to "be part of a national safety net needed to guarantee civic peace and achieve broad consensus about the process of transition".

"We affirm the principle of non-violent revolution. The absence of a unified political forum along the revolution ... is a dangerous shortcoming of Syria's march toward a civic democratic state," the declaration said.

But Ammar Qurabi, a member of a consultative committee that emerged from an earlier opposition conference in the Turkish city of Antalya, said in a statement the group had withdrawn from the Istanbul talks because the meeting did not build on earlier efforts to unite the opposition.

At a meeting with anti-Assad Syrian activists in Washington this month, U.S. Secretary of State Hillary Clinton encouraged them to work toward a "unified vision" for Syria.

The proposed council aims to speak for dissidents in exile, who are playing a key role in supporting the uprising financially, and activists on the ground.

A number of activists are wary about establishing a linear opposition structure, saying it would make it an easier target for assassinations and arrests by Assad's forces.

Dissident writer Michel Kilo, a former political prisoner who belongs to an elder generation of dissidents said this week that a transitional council would be of little value before Assad actually falls from power.