Activists in Homs said at least six inhabitants were killed in raids by security forces and rebel soldiers hit a tank on Tuesday with a rocket propelled grenade in the Bayada district. 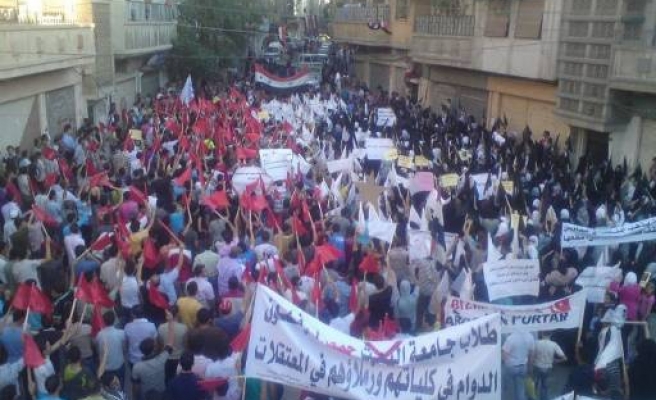 Syrian forces backed by tanks and helicopters stormed into the central town of Rastan on Tuesday to crush army deserters who are fighting back after months of mostly peaceful protests against President Bashar al-Assad, residents said.

Early on Tuesday, dozens of armoured vehicles entered Rastan, a town of 40,000 on the Orontes river north of Homs, after tanks and helicopters pounded it with heavy machineguns through the hours of darkness.

"Tanks closed in on Rastan overnight and the sound of machineguns and explosions has been non-stop. They finally entered this morning," said a resident named Abu Qassem.

Undeterred by the crackdown, more deserters declared the formation of another rebel military unit, of uncertain size, in the same area. And in a sign of increasingly heavily armed opposition to Assad, people in the nearby city of Homs said rebel soldiers hit a government tank with a rocket.

Hundreds of soldiers who have refused orders to fire on protesters have formed the Khaled Bin al-Walid battalion, named after the Arab conqueror of Syria, in Rastan. The force, led by Captain Abdelrahman Sheikh, has some tanks. Colonel Riad al-Asaad, the most senior military defector, is active in the area.

In the area of Houla, across the Orontes, thousands of villagers held an anti-Assad rally on Tuesday during which a new battalion of defectors was announced. Several soldiers in fatigues were seen in a YouTube video as a crowd chanted "Freedom!" Houla residents said they had attended the event.

To cheers, an announcer was seen in the video saying: "The Syrian Free Army declares the formation of the Ali bin Abi Taleb Battalion in Houla, Homs, under the command of First Lieutenant Colonel Fayez al-Abdallah, to be supervised by the Khaled bin al-Walid battalion ... to protect peaceful protests."

Rebel soldiers, who are estimated to number in the thousands across the country, have attacked army buses and roadblocks manned by troops and pro-Assad militiamen, known 'shabbiha'. These have multiplied in recent days as security forces try to disrupt protests and hunt down activists in the Rastan area.

Activists in Homs said at least six inhabitants were killed in raids by security forces and rebel soldiers hit a tank on Tuesday with a rocket propelled grenade in the Bayada district, which is inhabited by members of desert tribes who are now among the main opponents of Assad in the city of one million.

The region around Homs and the adjoining province of Idlib on the border with Turkey have emerged as hotspots of armed resistance, although the bulk of the armed forces, commanded by officers from Assad's Alawite minority, has remained nominally loyal, with tight surveillance by Alawite secret police and soldiers who disobey orders to crush protests risk being shot.

A senior diplomat in Damascus said rebel units were a mixed bag of deserters but that only the efforts of the Alawite officer corps were preventing much larger units joining them.

"The deserters so far are a hodgepodge," the diplomat said. "They did not train together and whole divisions are not leaving because of the Alawite control."

He said the key question is "whether or not this will spread and result in a more decisive break right across the military, (which is) unfortunately most likely to happen along sectarian lines with Sunni conscripts joining the opposition and Alawite officers and elite units holding firm with Assad."

The United Nations says more than 2,700 Syrians, including 100 children, have been killed in a six-month-old revolt against 41 years of Assad family rule in a mostly Sunni nation of 20 million. The government blames the violence on armed gangs, who it says have killed 700 members of the security forces.

Its version of events may finally becoming a self-fulfilling prophecy -- to the chagrin of many protesters who had been determined to keep their movement peaceful and deny the authorities any pretext for the violence they have meted out.

It was not immediately clear how much of Rastan was under the control of loyalist troops as exchanges of fire continued.

"We have not been able to go out onto the streets for two days and we have no idea of the casualties," another Rastan resident said, adding that helicopters had fired machineguns near his house on the southern edge of the town.

Local activists said more than 40 people had been wounded, but heavy gunfire had prevented many from reaching hospital. One activist said five civilians and rebel soldiers had been killed.

Washington, which courted Assad before the uprising began in March, inspired by popular revolts in Egypt, Tunisia, Libya and Yemen, described armed resistance to counter killings by the military as "an act of self-preservation."

The British-based Syrian Observatory for Human Rights said military police killed four soldiers trying to desert in Idlib province on Monday and two villagers in raids on the area on Tuesday. Another seven soldiers were arrested.

Idlib and Homs have traditionally provided the bulk of the army's manpower. They have also been the scene of some of the biggest street protests against Assad in the last few weeks.

Syria, under economic pressure from the turmoil and from Western sanctions now focusing on the oil sector, took the drastic step of banning most imports last week to lessen demand for the dollar and preserve dwindling foreign currency reserves.