An emergency Security Council meeting on Syria was cancelled after Russia withdrew its request for the session, while Obama also asked for the delay of the US Congress vote on a Syrian military strike 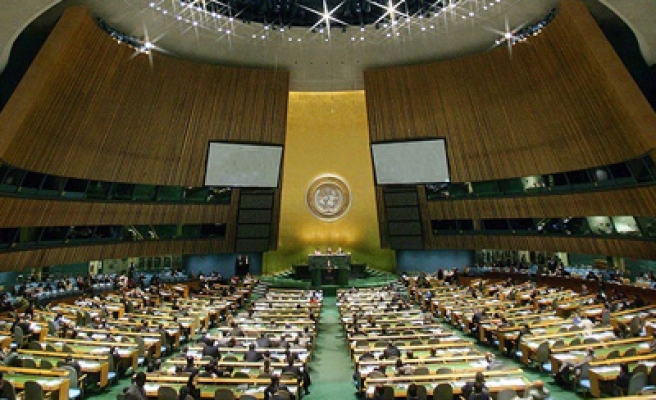 The United Nations Security Council (UNSC) could not discuss the United States' option of a military strike on Syria on Tuesday due to the disagreement between Russia and Western countries.

The "shameful inertia" of the UNSC, as UN Secretary-General Ban Ki-moon described the failure of the Security Council to take action on Syria, did not change despite new diplomatic efforts.

An emergency closed-door UN Security Council meeting on Syria scheduled for Tuesday was cancelled after Russia withdrew its request for the session.

The meeting was expected to focus on a Russian plan to place Syrian chemical weapons under international control, diplomatic sources said.

Two hours before the meeting, Gary Quinlan, President of the UN Security Council for the month of September and the current Permanent Representative of Australia to the United Nations, announced on his Twitter account that "Following withdrawal of the request for consultations, Security Council meeting scheduled for 4 pm (EDT) will not proceed."

However, Quinlan did not state which country demanded the cancellation of the meeting.

Earlier on Tuesday, Quinlan had called the members of the Council for the meeting on Syria.

Diplomatic sources stated that it was Russia who requested and withdrew its request for the UNSC meeting.

French Foreign Minister Laurent Fabius announced before the meeting that it would present to the UNSC a "draft resolution which asked Damascus to unveil its chemical arsenal," and emphasized international control and disposal of the chemical weapons possessed by the Syrian regime, otherwise urging for the use of military force on Syria.

"We don't want the Russian proposal on the handover of chemical arms by Damascus to be a 'maneuver' to create a diversion," said Fabius.

Russia was expected to offer a draft "presidency statement" demanding international control of Syria's chemical arsenal, but casting out the option of using force to enable such control, a notion not welcomed by other UNSC countries, sources also said.

Russia withdrew its request due to the Paris-Washington plan to propose a draft resolution to the UNSC under Chapter 7 of the UN’s charter allowing for the possible use of military action to restore peace, as sources claimed.

US President Barack Obama said on Tuesday in a televised speech that he would continue diplomatic efforts to dispose Syria's chemical weapons, ordering the US army to "be in a position to respond" if such measures fail.

The diplomatic solution suggested by Russia's President Vladimir Putin would require Syria's government to dispose all of its chemical arsenal or to place the weapons under international control.

Obama stressed that it was "too early to tell" if the Russian proposal would succeed, but that he was open to giving it a chance.

US President said he asked US lawmakers to postpone a vote on military strikes against Syria, which he advocated to punish the government of President Bashar al-Assad for its use of chemical weapons on Syrian civilians.

"I have therefore asked the leaders of Congress to postpone a vote to authorize the use of force while we pursue this diplomatic path," Obama said.

Obama stated that he "ordered the military to maintain their current posture" as he wanted to keep pressure on Assad, who denies the blame directed at his forces for using chemical weapons in the August 21 attack near Damascus which reportedly killed more than 1,400 people, including hundreds of children.

President Obama noted that his administration had long resisted international calls for military intervention in Syria as he did not believe in force as a solution for the civil war, adding that he had changed his mind after the chemical weapons attack in the Damascus suburbs on August 21, saying "The images from this massacre are sickening."

"On that terrible night, the world saw in gruesome detail the terrible nature of chemical weapons and why the overwhelming majority of humanity has declared them off limits, a crime against humanity and a violation of the laws of war," he added.