Annan has been hoping for consensus on a plan for a unity government that, by excluding from the leadership figures deemed too divisive, would effectively mean al-Assad stepping down. 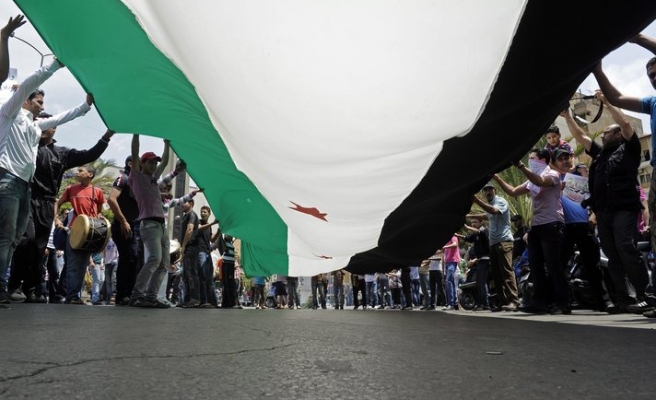 Foreign ministers of world powers gather in Geneva on Saturday to try and forge a common strategy to end the bloodshed in Syria, but differences between Russia and the West may thwart them.

Kofi Annan, the former U.N. chief who is special international envoy on Syria, has been hoping for consensus on a plan for a unity government that, by excluding from the leadership figures deemed too divisive, would effectively mean President Bashar al-Assad stepping down.

However, Moscow, a long-time ally of the Syrian strongman and an opponent in principle of what it sees as foreign meddling in domestic sovereignty, has voiced objections to any solution "imposed" on Syria from outside, while the United States and its European and Arab allies see no way ahead with Assad in power.

"We have a very good chance to find common ground at the conference in Geneva tomorrow," Lavrov told reporters, while also warning against what he called a counterproductive effort to dictate the outcome of a political transformation in advance.

His deputy, Gennady Gatilov, later tweeted Moscow's view of forcing Assad aside: "Our Western partners want to determine themselves the results of the political process in Syria," he said. "However, this is a matter for the Syrians themselves."

Nonetheless, Lavrov said he detected some flexibility on Clinton's part on the eve of talks due to start at U.N. offices in Geneva around 10 a.m. (0800 GMT): "I felt a change in Hillary Clinton's position. There were not ultimatums," he said.

"Not a word was said that the document we will discuss in Geneva cannot be touched," he said, a few hours after senior officials in Geneva failed to arrive at a compromise that could be presented to the foreign ministers for approval on Saturday.

A senior U.S. State Department official, speaking on condition of anonymity after the meeting in St. Petersburg, said respect for Annan meant the ministers would still attend.

"There are still areas of difficulty and difference," the official said. But as for the chances of an accord in Geneva, the official added: "We may get there; we may not."

The foreign ministers of the five permanent members of the U.N. Security Council - Russia, the United States, China, France and Britain - will attend Saturday's talks along with counterparts from regional powers Turkey, Kuwait, Qatar and Iraq as well as U.N. Secretary-General Ban Ki-moon and Nabil Elaraby, the secretary-general of the Arab League.

Annan is seeking backing for a proposal that does not explicitly state that Assad must step down, but does call for a unity government which would exclude figures who jeopardise stability.

Diplomats have said that Russia proposed changes on Thursday to Annan's plan for a national unity government, despite initially supporting it, but the United States, Britain and France rejected the amendments.

Annan, who brokered a much abused ceasefire in April, said early on Friday he was "optimistic" that the Geneva talks would produce an acceptable outcome. Later, senior officials holding preparatory talks there failed to overcome differences. Western diplomats said Russia was pressing for changes to Annan's text.

Russian diplomats said the work continued but they would not "impose" a solution on Syria.

Moscow has vetoed Security Council resolutions condemning the Syrian government over its crackdown on protests which began 15 months ago and have turned into something close to civil war with a sectarian tinge. The U.N. estimates at least 10,000 people have been killed.

Russia, and China, both conscious of the risk of internal revolt at home, have objected to what they see as Western interference in the domestic affairs of rulers like Libya's Muammar Gaddafi.

Western governments, however, have shown little will to repeat last year's Libyan experience of military support for Arab rebels in Syria, where Assad's forces are formidable and the complexities of religion and ethnicity much greater.

The world has been accused by Syrian opposition activists of inertia over the bloodshed.

Assad on Thursday dismissed the notion of any outside solution to the crisis which has imperilled his family's four decades in power: "We will not accept any non-Syrian, non-national model, whether it comes from big countries or friendly countries.

"No one knows how to solve Syria's problems as well as we do."

On the ground in Syria, fighting continued on Friday, with particular tension around the northern border with Turkey, a week after Syria shot down a Turkish warplane.

Regional analysts said that while neither Turkey nor its NATO allies appeared to have any appetite to enforce a formal no-fly zone over Syrian territory, Prime Minister Tayyip Erdogan had made clear Assad would be risking what he called the "wrath" of Turkey if its aircraft strayed close to its borders.

Erdogan told a rally in the eastern city of Erzurum on Friday, broadcast by Turkish television: "We will not hesitate to teach a lesson to those who aim heavy weapons at their own people and at neighbouring countries."

Turkey, sheltering some 34,000 Syrian refugees and providing bases for the rebel Free Syria Army, is in the forefront of the efforts to bring down Assad.