More than 200 bodies were found in houses and basements around Daraya, according to activists who said most had been killed "execution-style" by troops on house-to-house raids. 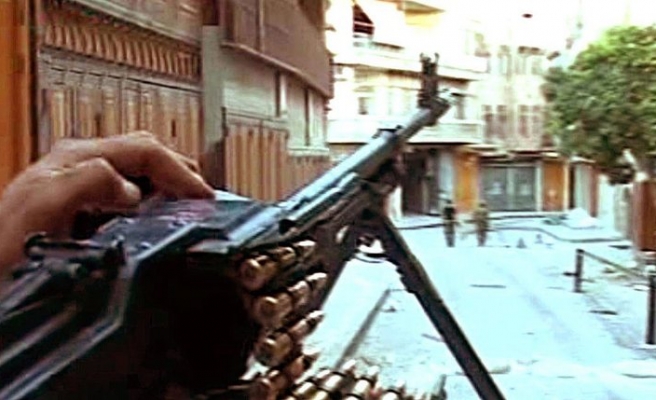 Syrian opposition activists accused President Bashar al-Assad's forces on Sunday of committing a massacre of scores of people in a town close to the capital that the army had just retaken from rebels.

More than 200 bodies were found in houses and basements around Daraya, a working-class Sunni Muslim town to the southwest of Damascus, according to activists who said most had been killed "execution-style" by troops on house-to-house raids.

Due to restrictions on non-state media in Syria, it was impossible to independently verify the accounts.

"Assad's army has committed a massacre in Daraya," said Abu Kinan, an activist in the town, using an alias to protect himself from reprisals.

"In the last hour, 122 bodies were discovered and it appears that two dozen died from sniper fire and the rest were summarily executed by gunshots from close range," Abu Kinan told Reuters by telephone.

The activist said he witnessed the death of an 8-year-old girl, Asma Abu al-Laban, shot by army snipers while she was in a car with her parents.

"They were trying to flee the army raids. Three bullets hit her in the back and her parents brought her to a makeshift hospital. Nothing could be done for her," he said.

The official state news agency said: "Our heroic armed forces cleansed Daraya from remnants of armed terrorist groups who committed crimes against the sons of the town and scared them and sabotaged and destroyed public and private property."

The Local Coordination Committees, an activists' organisation, said Assad's forces killed 440 people across Syria on Saturday, including dozens of women and children, in one of the highest death tolls since the uprising against his rule broke out in March last year.

The organisation, which monitors Assad's military crackdown, said 310 people were killed in Damascus and its environs, including Daraya, 40 in the northern province of Aleppo and 28 in Syria's Sunni tribal heartland region of Deir al-Zor.

The rest were reportedly killed in the Idlib, Deraa, Hama and Homs, outlying provinces where poverty and discontent with Assad's minority Alawite rule have been building up since bloody repression by Assad's father, the late President Hafez al-Assad, killed tens of thousands of people in the 1980s.

Video footage from activists showed numerous bodies of young men side-by-side at the Abu Suleiman al-Darani mosque in Daraya, many with what looked like gunshot wounds to the head and chest.

"A massacre," said the voice of the man who appeared to be taking the footage. "You are seeing the revenge of Assad's forces ... more than 150 bodies on the floor of this mosque."

The southern fringe of Damascus is a frontline in what has snowballed over the last 17 months from anti-Assad protests into a sectarian civil war.

Tanks deployed on the Damascus ring-road shelled the southern neighbourhoods of al-Lawwan and Nahr Aisheh late into Saturday night and fighting raged in the eastern Ghouta suburbs of the capital, residents said.

The army overran Daraya, one of a series of mostly rundown Sunni Muslim towns that surround Damascus, on Saturday after three days of heavy bombardment that killed 70 people, according to opposition sources and residents. They said most of the dead were civilians.

The activist Daraya Coordination Committee said in a statement that among those found with gunshots to the head were eight members of the al-Qassaa family: three children, their father and mother and three other relatives.

U.N. investigators said in a report this month that both sides in the conflict had performed summary executions - a war crime - but that Assad's troops and militia loyal to the president had committed many more offences than the rebels.

The report said government forces and militiamen loyal to Assad committed a massacre of more than 100 civilians in the town of Houla in May that the government blamed on Islamist "terrorists".

The United Nations estimates that more than 18,000 people have been killed in the conflict that pits a mainly Sunni opposition against a ruling system dominated by the Assad family for the last five decades.

Assad is an Alawite, an offshoot of Shi'ite Islam, and the sectarian nature of the conflict has already had an impact on neighbouring countries.

A Lebanese man who was abducted with a group of 10 other Lebanese Shi'ite pilgrims in Syria in May, triggering tit-for-tat kidnappings of Syrian activists in Lebanon, arrived home on Saturday, hours after Syrian rebels released him as a "goodwill gesture".

With Russia leading resistance to Western and Arab pressure for action against Assad, the United Nations Security Council remains deadlocked.

A new U.N. envoy, Algerian diplomat Lakhdar Brahimi, has said he is "humbled and scared" at the task of seeking a peaceful solution to the Syrian crisis.