Syrian troops killed at least 35 people, mostly unarmed civilians, when they shelled and overran a suburb of the capital Damascus, residents and activist organisations said. 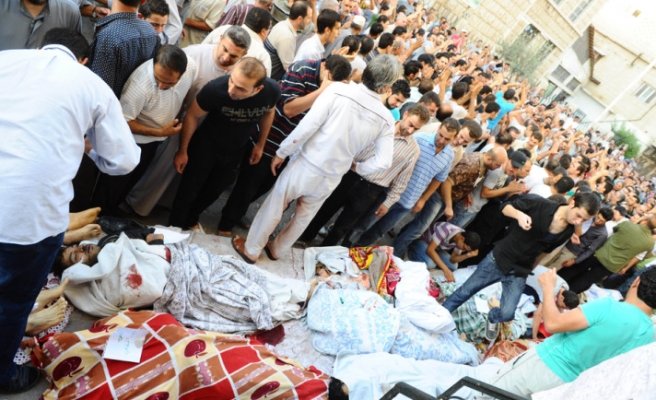 Syrian troops killed at least 35 people on Wednesday, mostly unarmed civilians, when they shelled and overran a suburb of the capital Damascus, residents and activist organisations said.

"The tanks and troops left around 4 p.m. When the streets were clear we found the bodies of at least 35 men," a resident, who gave his name as Fares, said by phone from Jdeidet Artouz, southwest of Damascus.

"Almost all of them were executed with bullets to their face, head and neck in homes, gardens and basements," he added, speaking of the troop action to crush opposition to President Bashar al-Assad.

Fares, who did not give his last name for fear of retribution by Assad's forces, said soldiers from the Fourth Division, a praetorian guard unit under the command of Assad's brother Maher, came into his house.

"They examined my ID and let me go. They seem to have been looking for activists or young men with a certain profile to execute," he said.

He said the bodies were collected at the Omar bin al-Khattab mosque and buried in a mass grave dug by a bulldozer volunteered by the owner of nearby farmland.

"There are more bodies in al-Sahl area but we could not reach them because there is an army roadblock there," he said.

Another resident of the suburb said the total number of dead was at least 50.

Rami Abdelrahman, head of the Syrian Observatory for Human Rights, said 26 of 35 bodies his organisation tallied in Jdeidet Artouz have been identified and the victims were overwhelmingly civilians.