Dozens rally in Sanaa for release of detainees

Demonstrators also demanded the expulsion of armed militias from Sanaa, in reference to Shiite Houthi militants who have seized control of the capital in September. 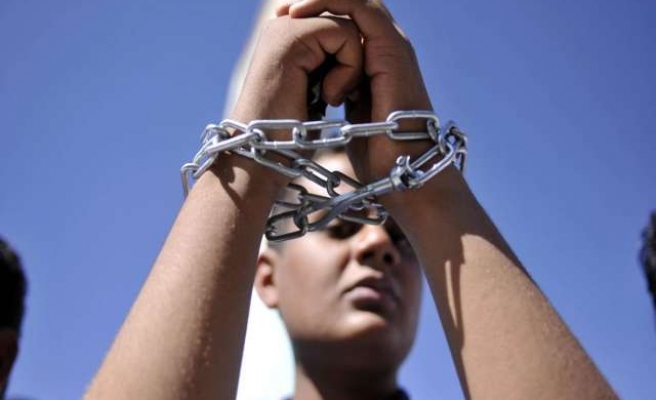 Dozens of Yemenis protested in capital Sanaa Saturday to demand the release of detained "revolutionaries" and the expulsion of armed militias from the capital.

Protesters, who gathered in al-Taghyeer Square in downtown Sanaa, called for the release of five detainees currently held in Yemen's central prison, and 19 others detained in the central prison of the northwestern Hajjah province.

Demonstrators also demanded the expulsion of armed militias from Sanaa, in reference to Shiite Houthi militants who have seized control of the capital in September.

"This protest comes nearly four years after the arrest of young revolutionaries who ousted former Yemeni President Ali Abdullah Saleh in 2011," Abdul-Karim Thoali, head of the Council of Revolution Detainees NGO, which organized the rally, told The Anadolu Agency.

"They were arrested in a manner that was in clear violation to the law," he added.

In 2011, Yemeni authorities arrested 22 "revolutionaries" in Sanaa on charges of blowing up a mosque inside a presidential compound in which Saleh and several aides had been performing prayers.

Another 19 were arrested in the Hajjah province on charges of killing an officer and three soldiers late 2011.

Trials for both cases have begun but verdicts have yet to be issued.

Yemen has recently appeared on the verge of civil war, as the Houthis seek to expand their control beyond capital Sanaa.

The Houthis' growing influence in the country has pitted the Shiite movement against both Al-Qaeda – said to be active in politically fractious Yemen – and allied tribes.