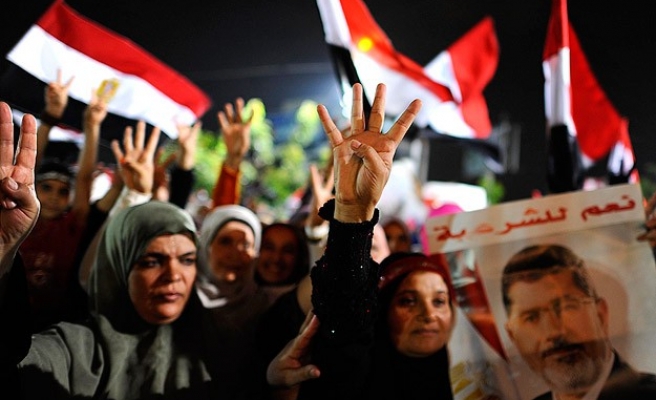 The National Council for Human Rights, Egypt's state-run rights watchdog, announced the results on Wednesday of its long-awaited report on last August's bloody dispersal of a main protest camp in support of ousted president Mohamed Morsi.

According to Nasser Amin, a council member who announced the council's findings, protesters had initiated the aggression against security forces shortly after the latter besieged Cairo's Rabaa al-Adawiya Square and announced through loudspeakers that protesters could leave through certain "secure corridors."

Speaking at a press conference in Cairo Wednesday afternoon, Amin said that the day-long operation had left 632 dead, mostly civilians caught in the crossfire between armed elements "planted among peaceful protesters" in the square and security forces.

He added that eight policemen had been among the casualties and denied that military forces had taken part in the dispersal, maintaining that they had only secured the "surrounding area."

According to Amin, clashes erupted shortly after security forces began asking protesters to leave through designated safe corridors, between 6am and 7am.

However, "fierce clashes" soon erupted after a police officer was shot and four soldiers injured by gunfire that emanated from inside the sit-in, Amin claimed.

Amin showed a simulation of the operation's timeline, during which he asserted that the heaviest clashes had taken place before a 1pm truce when safe passages were reopened to protesters wishing to leave.

"Security forces maintained proportionate use of arms against those used by armed elements [inside the square]," Amin announced.

"However," he added, "they [security forces] failed to maintain a portion of its restraint with regards to the intensity of firing."

Amin went on to say that ambulances could not enter the square until the operation wound down at around 6pm, due to heavy violence earlier as security forces were met with "armed resistance" from inside the square.

During the press conference, Amin showed footage he said was taken by residents of the surrounding buildings and which were broadcast for the first time. The videos featured unidentified gunmen firing and ducking between buildings and cars, which Nasser said was evidence that the sit-in included armed elements.

The report went on to call for an independent investigation into the incident and condemn "incitement campaigns" against protesters by pro-government media in the run-up to the dispersal.

The dispersal came a few weeks after Morsi, Egypt's first freely elected president, was removed by the army following demonstrations against his one year in office. The Egyptian government then launched a sweeping, sustained crackdown on his supporters, of which the Rabaa dispersal is seen as a turning point.