Egypt is set on Friday for another day of mass demonstrations by both supporters and opponents of deposed president Mohamed Morsi. 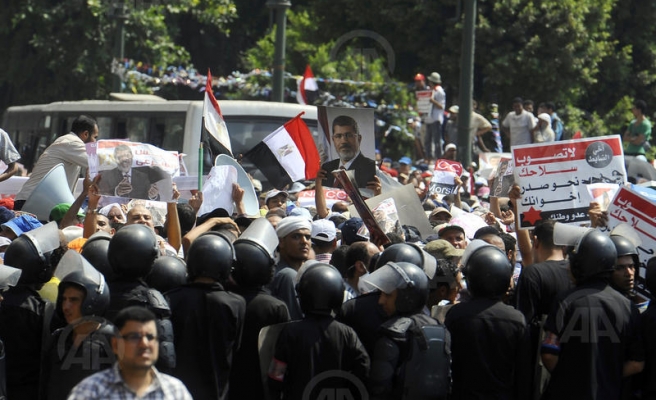 Egypt is set on Friday for another day of mass demonstrations by both supporters and opponents of deposed president Mohamed Morsi.

Opponents are preparing for mass protests in Cairo's Tahrir Square and outside the Ittihadiya presidential palace to reaffirm their support for the army-backed roadmap for Egypt's post-Morsi era.

"Our activities will start after aisha (evening) prayers in Tahrir Square and outside the Ittihadiya presidential palace and will also include nighttime Ramadan prayers," Riyam al-Masri, a leading member of the Tamarod campaign – which spearheaded the protests that culminated in Morsi's overthrow – told a press conference.

She asserted that there would be no activity in any other protest venues "to avoid bloodshed or clashes with Muslim Brotherhood members."

The National Alliance for the Defense of Legitimacy, an alliance of largely Islamist parties and groups including the Muslim Brotherhood, has also called for mass demonstrations to demand his return to office.

"We call on the Egyptian people to take to the streets and squares across the country on Friday," Muslim Brotherhood leader Essam al-Erian said.

"The only way out of the crisis caused by the bloody military coup is the return of constitutional legitimacy represented by the elected president, the suspended constitution and the dissolved Shura Council (the upper house of Egypt's parliament) through peaceful means," he added.

Morsi, Egypt's first democratically elected president, was deposed by the military on July 3 following huge demonstrations against his rule.

The army subsequently suspended the constitution and named Adly Mansour, the head of Egypt's constitutional court, as interim president.