"The Muslim Brotherhood does not know violence," Mohamed Badie said in a Cairo court ahead of the trial session. 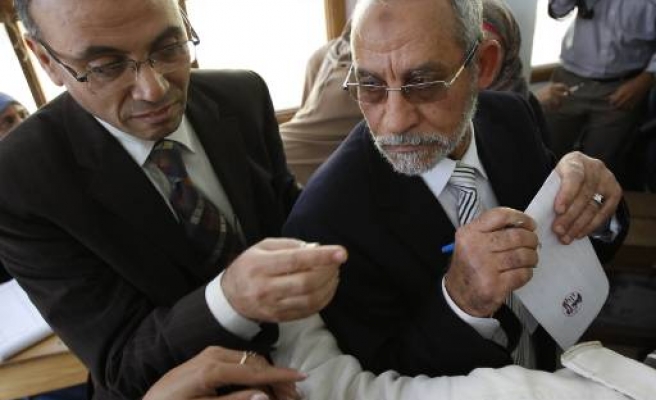 The leader of Egypt's embattled Muslim Brotherhood reiterated the group's commitment to nonviolence at a Wednesday court session in which he – along with 190 co-defendants – is accused of attacking a prison last January.

"The Muslim Brotherhood does not know violence," Mohamed Badie said in a Cairo court ahead of the trial session.

Several supporters greeted Badie and his co-defendants in the courtroom with chants of "God is great," to which the 70-year-old Badie replied: "God's victory is near."

Badie and 190 others are accused of trying to help prisoners break out of jail last January. The defendants insist the charges are politically driven.

The alleged incident dates back to January 2013, when hundreds of Port Said residents – angered by mass death sentences handed down against their relatives for their alleged roles in football-related violence – attacked the prison.

At least 50 people were killed in the subsequent violence.

During Wednesday's court session, the second in the trial, judges heard testimony from a forensic doctor who said the bullets found in the bodies of five Port Said residents killed in the incident were the same as those used by police.

On Tuesday, former army chief Abdel-Fatah al-Sisi – who led Morsi's overthrow last summer – was declared the winner of last week's presidential elections, the results of which the Brotherhood and its allies have refused to recognize.

Since Morsi's ouster and imprisonment 11 months ago, thousands of Brotherhood members and sympathizers have been jailed on multiple criminal charges that they say are politically motivated.

Badie himself is currently being tried on multiple charges, including incitement to violence and involvement in attacks on police.

Last December, Egypt's army-backed interim government labeled the 86-year-old Muslim Brotherhood a "terrorist organization," blaming it for a string of deadly attacks to which the group has denied any connection.