"The terminal will be closed today and will be reopened partially on Saturday," said Hamas official. 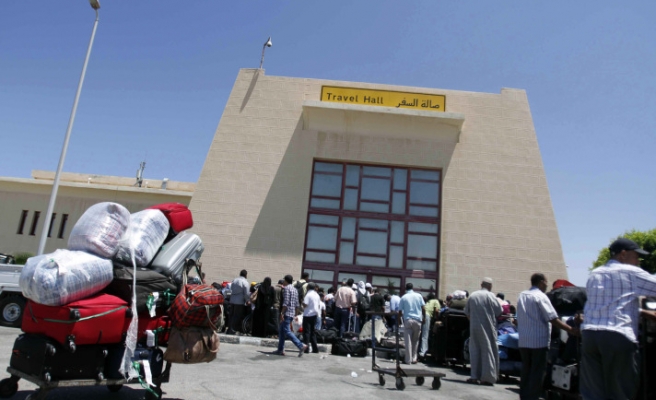 Egypt closed the Rafah border crossing with the Gaza Strip on Friday.

"The terminal will be closed today and will be reopened partially on Saturday," Maher Abu Sabha, the director of crossings in the Hamas government, told the Anadolu Agency.

He said the gate will be permanently opened on Saturday.

"But it will only be used for humanitarian cases and those travelling abroad," he said.

The Egyptian army closed the Rafah border gate on Friday, two days after the overthrow of elected president Mohammad Morsi.

The border terminal was partially opened on Thursday to allow stranded Palestinians to cross.

"No information is yet available whether the terminal will be opened Saturday or not," Egyptian sources told AA.

"I have chosen Dr. Bahaa El-Din as deputy prime minister and sent the nomination to the president," Beblawi said, adding he was holding talks with other candidates for his new cabinet that he expects to be formed within a few days.

No political group to be excluded: Egypt FM

15:20 -Egypt's Foreign Minister Mohamed Kamel Amr has said that no political group will be excluded in the process of "building democracy."

In a phone call with UN Secretary General Ban Ki-moon Thursday, Amr said Egypt is keen on "building a real democracy that guarantees the participation of all political groups without exclusion".

The top diplomat also said the roadmap agreed upon with political groups will be implemented swiftly, foreign ministry spokesman Badr Abdel-Atti said in a statement.

15:06 - Thousands of supporters of ousted president Mohammad Morsi have assembled in the Rabaa Al-Adawiya square in eastern Cairo vowing to contunue demonstrations until Morsi returns to power.

Speaking to the packed square, Salafist preacher Safwat Hegazi said Morsi's loyalists will not go home until the elected leader is released and reinstated as the country's president.

"We will not return home until the elected president Morsi is reinstated, parliamentary elections are held and a panel is formed to achieve reconciliation," he said.

Germany urges all parties in Egypt to refrain from violence

13:10 - Germany's Foreign Ministry on Friday urged all political parties in Egypt to refrain from violence or threats of violence, and called on Egyptian authorities to allow an international organisation access to ousted Islamist president Mohamed Mursi.

"All forms of political persecution would be extremely damaging for the future of Egypt. We call for an end to the restrictions on Mr Mursi, and we also urge all political powers, in particular the leaders of theMuslim Brotherhood, to refrain from all forms of violence or threat of violence," a ministry spokesman said.

He said Germany wanted a trustworthy, neutral international organisation to be allowed access to Mursi, who officials say is being held at a Republican Guard compound in Cairo. Mursi's supporters have called for protests on Friday.

12:56 - Egypt's interim prime minister will start contacting candidates for cabinet ministries on Sunday and Monday with a view to having the cabinet sworn in by the end of next week, he told Reuters on Friday.

Hazem el-Beblawi, a liberal economist and former finance minister, was named to head the cabinet after the army removed elected President Mohamed Mursi last week. He is trying to assemble an interim government to lead the country under an army "road map" to restore civilian rule.