Worried that the body could be dissolved, the constitutional assembly has been meeting daily in an apparent race against time. 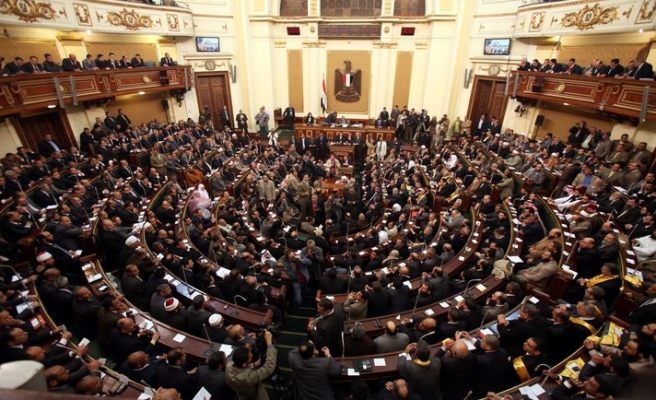 The struggle over Egypt's new constitution was temporarily suspended on Monday when a court deferred until late September the next step in a legal row that had threatened the dissolution of the body writing it.

The adjournment of a battle that has overshadowed one of the main components of Egypt's transition to democracy after the Arab Spring uprising that ousted Hosni Mubarak could give the current constitutional assembly time to complete its work.

That would give a boost to Islamists, including the Muslim Brotherhood, who have a big say in the body, and also may stave off any move by the influential military to form a new assembly.

Plaintiffs had brought the case demanding the body be dissolved on the grounds it had been formed illegally.

Held earlier this month, the last session in the case led to both a courtroom brawl and a new lawsuit filed by the Islamists to demand the removal of the judge on the grounds he was biased. It is that case which a court adjourned until Sept. 24, postponing further any discussion of the original case.

"It will be considered a sort of victory for the Muslim Brotherhood. It allows the assembly time to complete its task of returning a draft constitution," Mustapha Kamel Al-Sayyid, a professor of political science at Cairo University, said.

"I think this gives the assembly sufficient time."

Worried that the body could be dissolved, the constitutional assembly has been meeting daily in an apparent race against time. Their draft will define crucial questions such as the powers of the president and parliament and the role of the still-influential military establishment.

Abou Elela Mady, a politician who is a member of the body, said: "It is expected that the assembly will continue with success." Asked whether it would be able to finish its work by Sept. 24, he told Reuters: "God willing, we will try".

The completion of the new constitution is a crucial milestone in a new transition to civilian rule as laid out in a decree issued by the military leadership on the eve of Mursi's election win. The decree states that completion of the new constitution is the precursor to new parliamentary elections, until when the military will exercise legislative power.

The Muslim Brotherhood-led parliament that emerged from the last legislative elections, held from November to February, was dissolved on grounds that the election rules were unconstitutional - a move disputed by the Islamists.

Though Monday's decision appears to clear the way for the constitutional assembly to continue its work, the body will likely face more challenges ahead: the generals have the right to oppose any of the articles in the new document.

And the case against the assembly is unlikely to disappear. One of the plaintiff's lawyers pledged to continue his battle.

Shahata Mohamed Shahata, one of the lawyers, said he would ask the judiciary to refer the entire case to a new court, undermining the Islamists' claim of bias on the part of the current judge. "We will continue," he told Reuters.

But Al-Sayyid, the Cairo University professor, said preserving the existing assembly could be in the interests of too many players, including the military council, which he said may struggle to form a new one were the body to be dissolved.