During an inauguration ceremony on Sunday, al-Sisi said he would seek "tolerance and reconciliation" with all Egyptians "except those who have adopted violence." 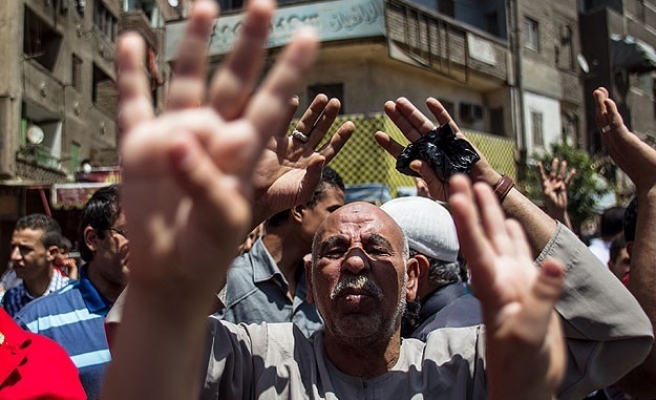 The Egyptian authorities are considering paying compensation to victims of political violence that has taken place since June 30 of last year, when opposition protests led to the ouster of elected president Mohamed Morsi by the army a few days later.

According to sources close to the issue, newly-elected President Abdel-Fattah al-Sisi, the former army chief who led Morsi's ouster, is mulling proposals to assign a government committee to look into compensation packages for the victims – even those who fell while taking part in protests against the army-backed interim government.

Yet, the sources said, these efforts would not aim to achieve reconciliation with Morsi's embattled Muslim Brotherhood or its allies.

"Reconciliation with the Brotherhood or Morsi's support bloc is unacceptable to al-Sisi," one source told Anadolu Agency on condition of anonymity.

According to the source, the proposed compensation is expected to cover all victims of post-June 30 political violence "who have not committed crimes against the nation."

"Offering compensation to the families of victims, especially al-Sisi's opponents who have not committed crimes against the nation, aims to undermine one of the means on which the pro-Morsi bloc relies to draw sympathy – the rights of the victims," the source said.

"Most victims are not Brotherhood members. It would be easy for the government to communicate with their families and close this file after Morsi's legitimacy was overruled by the election of al-Sisi as president," he added.

The Egyptian authorities have launched a massive crackdown on dissidents, topped by supporters of Morsi and his Muslim Brotherhood group. Hundreds have been killed and thousands rounded up on "incitement-to-violence" charges that critics say are politically motivated.

During an inauguration ceremony on Sunday, al-Sisi said he would seek "tolerance and reconciliation" with all Egyptians "except those who have adopted violence."

"Those who killed innocent Egyptians have no place in its [future] path," al-Sisi said, hours after being sworn in.

The source expects that the compensation plan will receive wide media support "to turn the page of the past."

"The Brotherhood and its allied [National Alliance for the Defense of Legitimacy] will be the losing side in the fight with the authorities," the source said.

Commenting on the proposal, pro-Morsi alliance member Alaa Abu al-Nasr said the issue of victims' rights should not be dealt with in this way.

"The victims' rights issue is a sensitive one, which should not be dealt with superficially. It should be handled in a more serious manner," he told AA.

Abu al-Nasr could neither confirm nor deny whether the proposal had been presented to the pro-Morsi alliance. But he said Islamic Law provided solutions to such issues, including retribution and blood money.

"The issue requires the establishment of a committee bringing together religious, legal and social experts to produce a vision acceptable to all parties," he added.