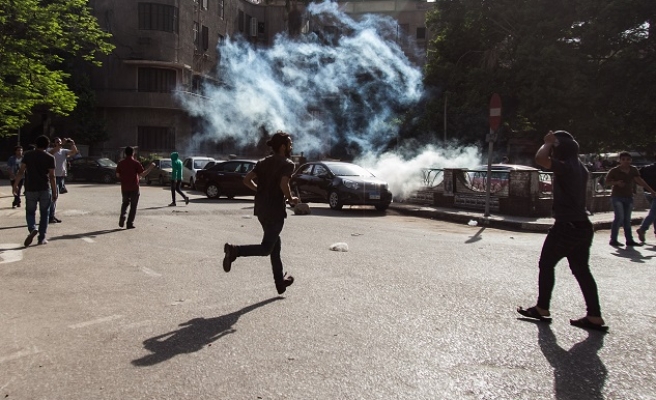 Egyptian security forces on Monday fired teargas at anti-regime demonstrators -- and carried out numerous arbitrary arrests -- in Cairo’s Dokki district, according to eyewitnesses.

On Monday afternoon, a rally was held in Cairo’s Giza district -- along with several other demonstrations organized by Egypt’s embattled opposition -- to protest a recent government decision to transfer sovereignty of two Red Sea islands from Egypt to Saudi Arabia.

Cairo’s downtown area saw particularly tight security on Monday, especially near Tahrir, Talaat Harb and Abdel-Moneim Riad squares -- all of which have served as protest venues in the past.

In the morning, police patrols combed the areas, subjecting passersby to arbitrary inspections.

Opposition groups called for Monday’s rallies to protest a recent decision by the al-Sisi regime to cede two Red Sea islands -- which for decades had been considered Egyptian territory -- to Saudi Arabia.

Al-Sisi, a former army chief who spearheaded the 2013 military coup that unseated Morsi, has come under fire since the announcement earlier this month that sovereignty over the Red Sea islands of Tiran and Sanafir would be ceded to oil-rich Saudi Arabia.

The two islands lie at the entrance of the strategically important Straits of Tiran, which separates the Gulf of Aqaba from the Red Sea.

The controversial maritime border readjustment, which was announced during a recent visit by Saudi King Salman to Egypt, has sparked public outrage and accusations that al-Sisi was "selling" Egyptian territory to Saudi Arabia, which was a major supporter of Morsi’s ouster almost three years ago.

Several Egyptian opposition groups have voiced support for Monday’s planned protests, including the April 6 youth group and the Muslim Brotherhood, both of which played leading roles in a 2011 popular uprising that ended the 30-year rule of autocratic President Hosni Mubarak.

The demonstrations come despite a government ban on street protests.