Streets of the usually-bustling capital were eerily quiet in the early hours of Thursday, as a government-imposed curfew went into effect in 14 of Egypt's 27 provinces. 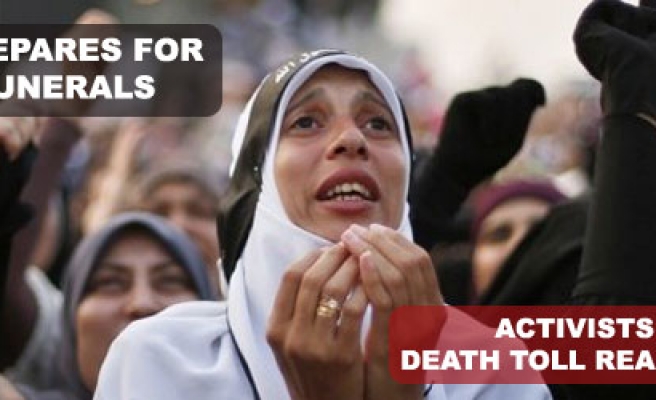 Relative calm appeared to prevail in the streets of Cairo, which saw Wednesday one of its deadliest days since Egypt's 2011 revolution, with several funerals planned Thursday for those who fell in yesterday's bloody crackdown on supporters of ousted President Mohamed Morsi.

According to the Health Ministry, at least 525 were killed nationwide in Wednesday's violence, including 202 people cut down during the dispersal of a main pro-Morsi sit-in in Cairo's Rabaa al-Adawiya Square.

However, the official death toll remains far below figures given by the pro-Morsi National Alliance for the Defense of Legitimacy, which has put the number of deaths from the Rabaa sit-in alone at 2,600.

Streets of the usually-bustling capital were eerily quiet in the early hours of Thursday, as a government-imposed curfew went into effect in 14 of Egypt's 27 provinces.

Most banks, government offices and businesses remained closed, while many citizens opted to stay in their homes due to fears of renewed violence.

Traffic was allowed into Rabaa al-Adawiya Square and Giza's Nahda Square -- which until yesterday had been the two main pro-Morsi protest sites -- for the first time in six weeks.

Cleaning crews could be seen clearing the two destroyed tent cities in the aftermath of Wednesday's crackdown.

The pro-Morsi alliance has called for Thursday demonstrations in the Upper Egyptian Assiut province to denounce yesterday's violence.

Other provinces were also expected to see major demonstrations on Thursday.