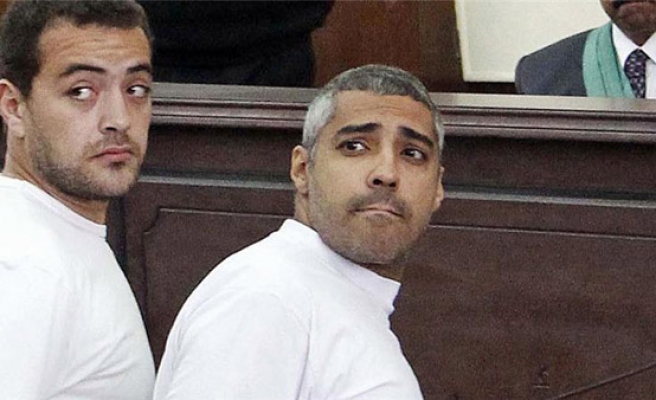 An Egyptian court sentenced three Al-Jazeera reporters to three years in prison on Saturday, despite a global campaign calling for their release.

Canadian Mohamed Fahmy and Egyptian producer Baher Mohamed were present in court. Australian journalist Peter Greste was tried in absentia after his deportation early this year. The journalists  were accused of supporting the blacklisted Muslim Brotherhood in their coverage for the Qatari-owned broadcaster Al Jazeera.

In June 2014, the journalists were sentenced to seven years in prison.

Mohamed was given an additional three years after police found a bullet at his home that he had picked up covering protest clashes.

But an appeals court overturned the verdict, finding that the prosecution's evidence was scant.

It ordered a retrial, whose verdict has already been twice postponed in recent weeks.

Greste is being tried in absentia.

"Eyes of world on Egypt today - opportunity for Egyptian justice system to deliver justice for #FreeAJStaff," he wrote on Twitter.

The trial has become an embarrassment for President Abdel Fattah al-Sisi, the then army chief who ousted the Muslim Brotherhood's Mohamed Morsi from the presidency in 2013 and has been cracking down on his supporters ever since.

Fahmy, who dropped his Egyptian citizenship in hopes of being deported as Greste was early this year, said he looked forward to finally seeing justice and winning an acquittal.

"From day one it's a politicised trial. If justice is to be served we should be acquitted as impartial journalists," said Fahmy, who formerly worked for CNN, on the eve of the session.

His lawyer, the London-based Amal Clooney, was in court on Saturday. She is later due to meet government officials to press for his deportation and pardon, said Fahmy, who has been barred from leaving the country.

Fahmy and Greste were arrested at a Cairo hotel where they had a makeshift studio in December 2013, six months after Morsi's overthrow. Mohamed was picked up at his home.

The three were accused of having supported the Brotherhood in their coverage. However, during the trial, the prosecution failed to find fault in their reporting.

"The technical committee that was appointed by the judge gave the court a report stating that none of our reports were fabricated. I am positive we will not be convicted for the fabrication charges," Fahmy said.

Al-Jazeera's Arabic channel had been supportive of Morsi, but Fahmy, Greste and Mohamed worked for the English news channel.

Their arrest came at a low point in relations between Egypt and Qatar, which supported the Brotherhood and hosted some of its exiled leaders.

The court may decide to punish the defendants for working for an unlicenced channel, after Cairo pulled Al-Jazeera's permit following Morsi's overthrow.

But Fahmy says they discovered that the broadcaster was unlicenced during their trial, when a prosecutor presented evidence to that effect.

"We were shocked when the prosecutor gave this document; we didn't know this," Fahmy said.

"We were kept in the dark about this matter and, when we asked, the network informed us that all our documents were legal."

Mohamed and Fahmy were released on bail at the start of the retrial in February.

If they receive a suspended sentence, or an acquittal, Fahmy will likely be deported to Canada.

Sisi has said he wished the reporters had been deported rather than put on trial.

Washington and the United Nations had called for their release, and their trial was seen as damaging to the country's international standing.

The New York-based Committee to Protect Journalists said at least 18 reporters are imprisoned in Egypt.