The three were detained in late December and charged with helping a "terrorist organisation" by publishing lies that harmed the national interest and supplying money, equipment and information to 16 Egyptians. 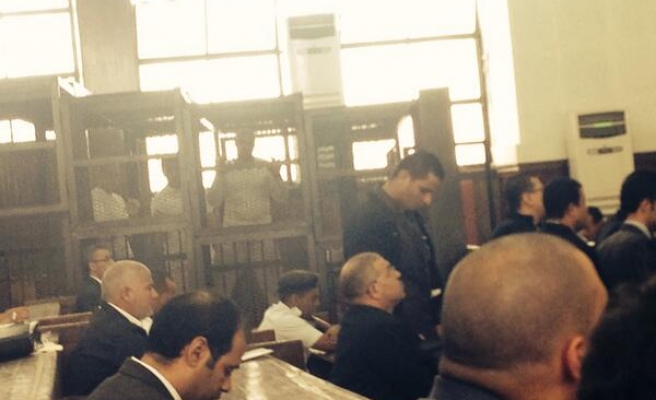 An Egyptian court has sentenced three Al Jazeera journalists to seven year jail terms in the final session in a trial on Monday, in a case that has raised questions about Egypt's respect for media

Another 11 defendants were sentenced in absentia to 10 years.

The three were detained in late December and charged with helping a "terrorist organisation" by publishing lies that harmed the national interest and supplying money, equipment and information to 16 Egyptians.

Families waved to the defendantes and Greste and his brother Andrew gave each other the "thumbs up" sign.

Abdullah al-Shamy, an Al Jazeera colleague who had been detained but was recently released after hunger strike, was also there. "I'm certain of their innocence," he said.

All three have been held at Egypt's notorious Tora Prison for six months, in a case that has drawn criticism from Western governments and human rights groups.

Al Jazeera's Cairo offices have been closed since July 3 when security forces raided them hours after the army ousted Morsi following mass protests against his rule.

Western governments have voiced concern over freedom of expression and press freedom in Egypt since Morsi's ouster and the crackdown has raised questions about Egypt's democratic credentials three years after an uprising toppled Hosni Mubarak after 30 years in power and raised hopes of greater freedoms.

The ruling was due a day after U.S. Secretary of State John Kerry met newly elected Egyptian President Abdel Fattah al-Sisi in Cairo and discussed the political transition the country.

A senior State Department official accompanying Kerry said Washington was worried about the use of heavy-handed political and security tactics but that there had been "a few flickering signs of positive movement" in recent weeks.

Egyptian officials have said the case is not linked to freedom of expression and that the journalists raised suspicions by operating without proper accreditation.

The trial began on Feb. 20. The journalists, known in the Egyptian media as "The Marriott Cell" because they worked from a hotel of the U.S.-based chain, have appeared in previous court sessions wearing white prison garb and standing in metal cages.

Six of the 17 others on trial are also in detention. Five of them are identified by the prosecution as students and one as a businessman. The remainder, including three other foreign journalists, are being tried in absentia.

Greste, Fahmy and Mohamed all deny the charges and Qatar-based television network Al Jazeera has said the accusations are absurd. The journalists have told reporters covering the trial that they have never met the students on trial with them.

The Gulf state of Qatar, which funds Al Jazeera, backs the Muslim Brotherhood. Its ties with Egypt have been strained since Sisi ousted Morsi last year after mass protests against his troubled one-year rule.