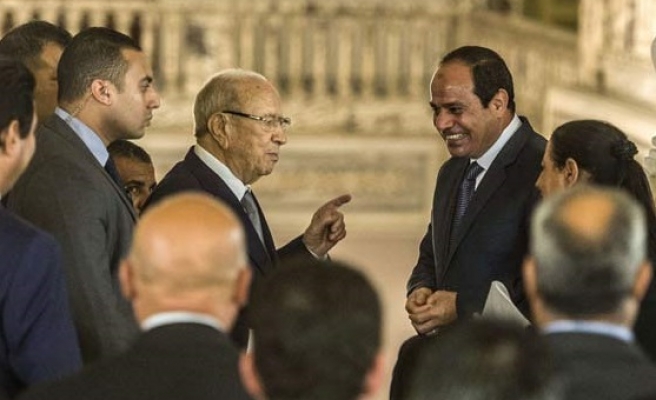 The two leaders also discussed cooperation in combating terror and extremism that posed a threat to the two peoples.

Sisi and Essebsi also condemned the incidents in the al-Aqsa mosque in Jerusalem which threatened the stability of the Middle East.

In addition to stressing the need to boost bilateral relations, the two leaders lauded the results of the joint committee meeting held in Tunis last month under the two countries' prime ministers.

Meawhile, Sisi highlighted the importance of the first official visit by the Tunisian leader to Egypt, adding that the two countries are always keen on developing their ties and to face joint challenges.

Bilateral trade exchange will be increased, Sisi said, noting that private sector will mark a new stage of cooperation between the two nations.

On Syria crisis, the two leaders affirmed the need to achieve a political settlement to the conflict that maintains the unity of the Syrian territories.

Essebsi, for his part, expressed pleasure to be invited by the Egyptian leader to attend the October War Victory celebrations, noting that this war returned to Arab people and armies their dignity.

He said that the talks with the Egyptian president went in a very positive atmosphere.