Stating that "Today's events are deplorable and they run counter to Egyptian aspirations for peace, inclusion and genuine democracy," Kerry urged the interim government to remove the state of emergency "as soon as possible." 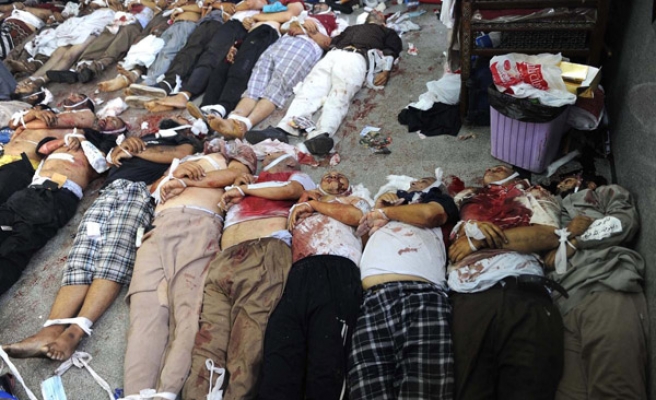 US Secretary of State John Kerry called for an urgent end to state of emergency in Egypt, while the US strongly condemned Wednesday's violence and bloodshed across Egypt.

Kerry, in a press conference, said "US strongly condemns today's violence and bloodshed across Egypt. It's a serious blow to reconciliation and the Egyptians' -- people's hopes for a transition towards democracy and inclusion".

"We and others have urged the government to respect the rights of free assembly and of free expression, and we have also urged all parties to resolve this impasse peacefully and underscored that demonstrators should avoid violence and incitement," said Kerry.

In the wake of Wednesday's police assault on civilians in Egypt, Kerry said "Today's events are deplorable and they run counter to Egyptian aspirations for peace, inclusion and genuine democracy. Egyptians inside and outside of the government need to take a step back. They need to calm the situation and avoid further loss of life."

The state of emergency should end

Regarding the declaration of month-long state of emergency by Egypt's presidency, Kerry said, "we also strongly oppose a return to a state of emergency law. And we call on the government to respect basic human rights, including freedom of peaceful assembly and due process under the law.

"We believe that the state of emergency should end as soon as possible," said Kerry.

Violence, not a solution

"Violence is simply not a solution in Egypt or anywhere else. Violence will not create a road map for Egypt's future. Violence only impedes the transition to an inclusive civilian government, a government chosen in free and fair elections that governs democratically, consistent with the goals of the Egyptian revolution."

For the economy of Egypt after the latest developments, Kerry said, "violence and continued political polarization will only further tear the Egyptian economy apart and prevent it from growing, providing the jobs in the future that the people of Egypt want so badly".

About the last week talks in Cairo, Kerry said, "US strongly supports the Egyptian people's hope for a prompt and sustainable transition to an inclusive, tolerant, civilian-led democracy. Deputy Secretary of State Burns, together with our EU colleagues, provided constructive ideas and left them on the table during our talks in Cairo last week".

"This includes amending the Constitution, holding parliamentary and presidential elections, which the interim government itself has called for. All of the other parties, all of the opposition, all of civil society, all parties also share a responsibility to avoid violence and to participate in a productive path towards a political solution," Kerry added.

No solution through further polarization

"There will not be a solution through further polarization," regarding the clashes between the supporters of anti-coup and coup.

"This is a pivotal moment for all Egyptians. The path towards violence leads only to greater instability, economic disaster and suffering. The only sustainable path for either side is one towards a political solution. I am convinced, from my conversations today with a number of foreign ministers, including the foreign minister of Egypt," said Kerry and added, I am convinced that that path is, in fact, still open and it is possible, though it has been made much, much harder, much more complicated by the events of today".

"The world is closely watching Egypt and is deeply concerned about the events that we have witnessed today. The United States remains at the ready to work with all of the parties and with our partners and with others around the world in order to help achieve a peaceful, democratic way forward," Kerry added.

Morsi's Freedom and Justice Party had said clashes between the forces and protesters left 1,000 people dead and 10,000 injured.

The interim government has declared a state of emergency and an eleven-hour curfew in 14 provinces, both in force for a month. There are reports of protests breaking out in several cities across the country.