A tide of detentions and killings of protesters has prompted former Tamarud leaders to turn against the army and security forces. 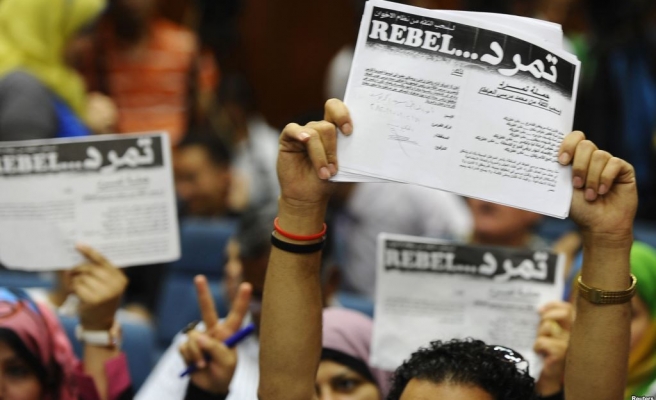 Their campaign against President Mohamed Morsi helped the army topple Egypt's first freely elected leader, but some leaders of the Tamarud movement have broken away, saying the military threatens democracy.

The split in Tamarud (Rebellion) is a sign of growing public anger against the army-backed government installed after Field Marshal Abdel Fattah al-Sisi deposed Morsi in July, following a Tamarud-organised petition and mass protests against him.

Human rights groups have criticised a fierce state crackdown on Morsi's Muslim Brotherhood since then, saying it includes mass arrests and torture, charges the authorities deny.

"We wanted the army to help us oust Mursi, not take over power itself," said Mohamed Fawzi, leader of a splinter faction calling itself Tamarud 2 Get Liberated, told Reuters. "The army's role is to protect and guard the state, not to rule."

Sisi is now expected to run for president and revive a long tradition of military men leading the biggest Arab nation.

The field marshal is cast by his followers as a national saviour. His image is ubiquitous, appearing on posters, t-shirts and chocolates.

But a tide of detentions and killings of protesters has prompted former Tamarud leaders to turn against the army and security forces, despite the rising risks of dissent in Egypt.

"We are seeing a return of the police state, but with new faces," Fawzi said, in reference to security forces which were dreaded under Hosni Mubarak, but which have found their way back to power since a popular uprising toppled the autocrat in 2011.

One reason cited by disaffected Tamarud members for breaking away is what they said were ties between the group's founders and state security agents who influenced and guided them.

"At the beginning we had no doubts about them, but later after checking their background and gathering more information we realised they were state security recruits who had received special training," said Tamarud 2 member Ahmed Hassan.

Tamarud leaders have denied police had infiltrated the group, but some members have privately admitted that some of its founders had been planted by state security.

Tamarud 2 also accused Tamarud of lying about the number of anti-Morsi signatures the group said it had gathered last year.

Tamarud 2 said only 8.5 million were secured, not the 22 million claimed just before mass protests against Morsi began in June.

Tamarud's announcement it would back Sisi for the presidency provoked factional street fighting this month.

Tamarud 2 has started a petition asking Egyptians to oppose army rule, saying it has garnered two million signatures, mostly online, so far. There was no way to confirm this independently.

Tamarud 2 was formed by disillusioned Tamarud members who said they had changed sides shortly after Morsi's fall and other independent pro-democracy activists hostile to army rule.

"The new movement could become a real force for political change if it succeeds in offering social services and practical solutions to the people's economic and political problems," said political analystMustapha Al-Sayid.

Fawzi, the 25-year-old leader of the breakaway group, said Tamarud 2 has around 400 members so far and hopes to project its message in an awareness campaign called "Know your president" to persuade Egyptians to vote for a civilian leader, not Sisi.

The army and police have killed hundreds of Brotherhood supporters on the streets, detained thousands and put top leaders on trial. Security forces have also started jailing secular activists, including ones who backed Morsi's removal.

"The army, in power for over 60 years, does not want to leave power," said 51-year-old Tamarud 2member Mohamed Aly.

"I feel I am under occupation," he said, fighting back tears. "I no longer feel this army is my army when I see tanks facing citizens on the streets. It scares us."

All of Tamarud 2's members backed the anti-Mubarak revolt, according to Fawzi, but not everyone took part in the protests against Morsi. Some saw his overthrow as an army coup.

Aly says it might have been better if Morsi had fallen via street protests, instead of being unseated by Sisi, a former military intelligence chief under Mubarak, who then unveiled a political roadmap meant to lead to elections.

"Also I think some state authorities were working against Mursi or were not helpful," Aly said. "Maybe he was not given a full chance."

But one of his Tamarud 2 colleagues, Yasser Hamid, a 45-year-old tourism employee, said the army had to get rid of Morsi who only wanted "to empower himself and his Muslim Brotherhood".

Tamarud 2 may form a political party to contest a parliamentary election, expected after the presidential vote.

"We will continue to fight for a civilian regime that implements real democracy, the one we are now dreaming of and which will make Egypt a better place for our children," Tamarud 2's spokeswoman Maha Al-Badiny said.

"We know many people are afraid to talk and say what they really believe, but we won't get anywhere like that," she said.

"Someone has to come out, defeat the fear, and talk. That would encourage people. And that is what we are doing."