"Corruption is the greatest misfortune of the Egyptian history. The stagers of the military coup are actually concerned that the corruption will come to light. 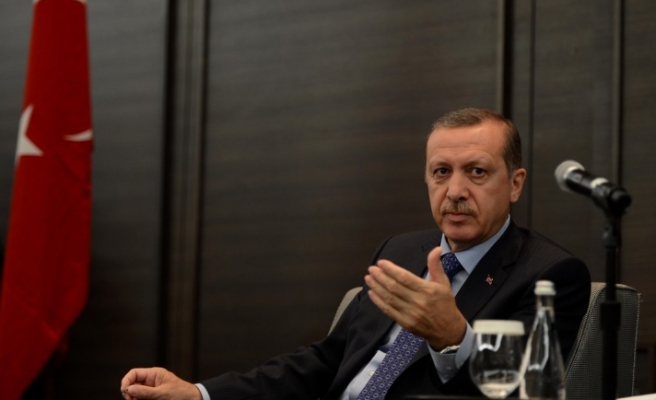 Turkish Prime Minister Recep Tayyip Erdogan said on Friday that "the stagers of the military coup in Egypt are afraid of and refrain from the polls as they see that they cannot win."

Speaking to the press after the Friday prayer at Mimar Sinan Mosque in Istanbul, Erdogan commented on the recent situation in Egypt after the military coup that ousted Egypt's first democratically elected President Mohamed Morsi.

PM Erdogan expressed his regret that the world and the Western countries have just realized that what has happened in Egypt was a military coup.

Stressing that the military coup in Egypt was actually staged to cover up the corruption in the country, Turkish premier stated that "the greatest obstacle they face is the polls. Why are they afraid of and avoid elections? Because they realized that they have no chance to win."

"Corruption is the greatest misfortune of the Egyptian history. The stagers of the military coup are actually concerned that the corruption will come to light. They are afraid of and refrain from the polls as they see that they cannot win. Those who believe they cannot win the elections always prefer ways like coup. But, people no more and will never let such people attain their goals," Erdogan said.

Erdogan argued that "the stager of the military coup" in Egypt now also wants to pour his own supporters to the streets.

"He makes statements about the ousted President Morsi anytime he wants. He claimed that the Egyptian Army detained Morsi and sentenced him to prison for 15 days for allegations like provoking the Egyptian people and establishing relations with Hamas. Governments have the right to get into relations and contact with any country at any time in any way. Any restriction for that is out of the question. Besides, the person in question is the President," he noted.

Answering a question about the visit to Turkey of Salih Muslim, the leader of Democratic Union Party (PYD) organization linked to the PKK, Erdogan said, "in line with the decision taken regarding this issue, Turkish intelligence officials are holding and will hold the necessary talks with them in order to make the required warnings that they are taking wrong and dangerous steps. It is the framework of the talks."

As the leader of one of the parties in the recent fierce clashes ongoing in northern Syria near the Turkish border, PYD leader Salih Muslim arrived in Turkey on Thursday for two-day talks.

Turkish Premier Erdogan also commented upon the letter published in The Times.

"They are people who hired their thoughts and opinions. If they really believed in democracy, they would not have dared viciously to call the leader of a party winning half of the votes in Turkey as a 'dictator.' It is a perfect tactlessness, as my advisor called," he added.

Several artists and scholars, including celebrities known for their activism, such as Sean Penn, Susan Sarandon, Ben Kingsley and movie director David Lynch, condemned the Turkish authorities’ attitude on June's Gezi Park protests in Turkey in a full-page letter published on July 24 in British daily The Times.