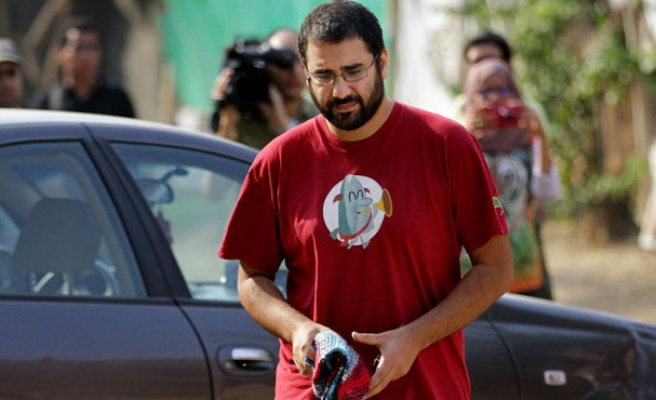 An Egyptian court sentenced a prominent activist to five years in jail on Monday for violating a law that seeks to curtail demonstrations, part of one of the toughest crackdowns on dissent in the country's history.

After the verdict was read out, chants of "down, down with military rule" rang out from supporters of Alaa Abdel Fattah crowded into the courtroom.

Abdel Fattah was a leading secular figure in the 2011 revolt that toppled autocrat Hosni Mubarak. He was first sentenced on the anti-demonstration charge, along with 24 co-defendants, to 15 years in absentia before a retrial was ordered.

The blogger and software engineer has been in and out of jail on various charges since veteran leader Mubarak's fall. He is one of several well-known activists to have been jailed since the army overthrew President Mohamed Mursi in mid-2013.

Monday's verdicts saw one other defendant, Ahmed Abdulrahman, also sentenced to five years, 18 defendants to three years, and others tried in absentia to 15 years.

Earlier, the same court adjourned to March 8 the trial of two Al Jazeera television journalists charged with aiding a terrorist organisation - a reference to Mursi's since banned Muslim Brotherhood.

'NOT A SINGLE OFFICIAL'

Khaled Dawoud, spokesman for the opposition Dostour Party, said those responsible for the murder of hundreds of people during the Mubarak era were still at liberty.

"Not a single official from the Mubarak regime has been sentenced, not a single police officer," he said.

"We have young Egyptians dying everyday and not a single person gets sentenced except those who believe in peaceful protest."

In January, Egypt's high court overturned the only remaining conviction against Mubarak, opening the way for his possible release four years after the revolt that toppled him and raised hopes of greater freedoms in the most populous Arab state.

Egypt's police force, which retreated into the background during Mubarak's demise, is now viewed as more powerful than ever, with human rights groups complaining it is rarely prosecuted for abuses.

The Interior Ministry says it investigates any allegations of wrongdoing by policemen.

President Abdel Fattah al-Sisi, a former army chief, has cracked down on opponents, and liberal activists like Abdel Fattah who defy authorities have also been rounded up.

By contrast, Mubarak-era figures are slowly being cleared of charges.