Egyptian man reports wife to police for belonging to Brotherhood

An Egyptian man reported his wife to security prosecutors for belonging to the Muslim Brotherhood. 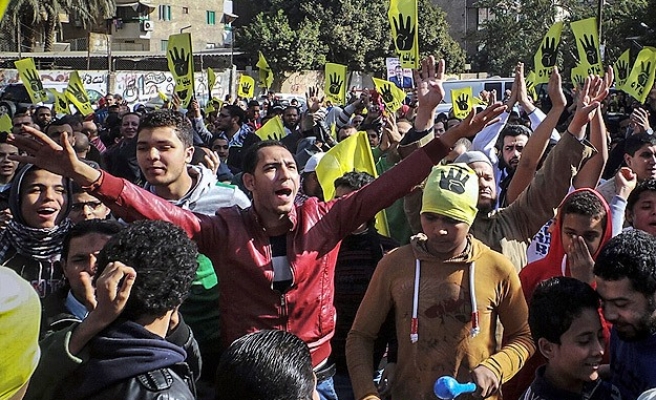 In a sign of mounting polarization in Egypt, a man reported his wife to State Security prosecutors on Wednesday for belonging to the Muslim Brotherhood, the group – now outlawed – from which ousted president Mohamed Morsi hails.
In a report filed with Egypt's State Security Prosecution, which deals with high-profile criminal and terrorist cases, Ahmed Fathi al-Gharabawi claimed to have discovered his wife's links with the Brotherhood immediately after Morsi assumed the presidency in June 2012.
Al-Gharabawi claimed that, when Morsi was ousted by the military one year later, his wife – who works as an assistant professor of medicine – began inciting her students to hold demonstrations in support of the ousted president.

In his report, al-Gharabawi wrote that his relationship with his wife had soured after she asked him to join the group, which was designated a "terrorist" organization by the government last December.

The "terrorist" designation immediately followed the bombing of a police headquarters in Egypt's Nile Delta – an attack that the Brotherhood condemned and denied any involvement in.

In his report, he enclosed a photo of his wife in London flashing the four-fingered Rabaa salute, which commemorates hundreds of pro-Morsi demonstrators killed during the violent dispersal of two sit-ins last August.

According to Samir Sabri, al-Gharabawi's lawyer, State Security prosecutors planned to open an investigation into his client's allegations against his wife, who, he added, would soon be summoned for questioning.

In his report, al-Gharabawi called for a harsh punishment for his wife, who, he alleged, belonged to a "terrorist" group and had incited students to stage protests.
Since the start of the new school year last October,Egyptian universities – especially Cairo's Al-Azhar University – have become hotbeds of protest against Morsi's ouster.
Last Mod: 31 Ocak 2014, 11:19
Add Comment