Most of the headlines mobilize people to take to the streets to support the army, and explained “confronting terrorism and violence” to mean dispersing the mass protests and sit-ins held by loyalists of ousted president Mohamed Morsi. 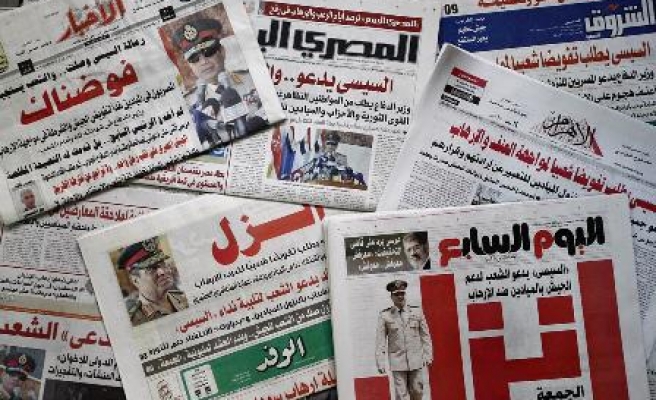 Egyptian state and private newspapers front-paged on Thursday army chief and Defense Minister Abdel-Fatah al-Sisi’s call for mass protests on Friday to authorize him to “confront terrorism and violence.”

Most of the headlines were supportive of Sisi's call and tended to mobilize people to take to the streets to support the army.

The supportive media explained “confronting terrorism and violence” as meaning dispersing the mass protests and sit-ins by loyalists of ousted president Mohamed Morsi.

“Go to protest” was the most common headline in today’s state and private newspapers, including the liberal Al-Wafd, the mouthpiece of Al-Wafd Party.

It urged the Egyptian people to take to the streets in response to Sisi’s call.

The same headline was used, in bold red, by the private dailies Tahrir and Youm7.

Some newspapers went as far as suggesting that the people had already accepted and responded to the call.

The headline of the private Al-Masry al-Youm daily was: “Sisi asks….people respond.”

Another headline on the same page read, in bold red: “We authorize you.”

The major state and private channels have also announced they would not be airing any of the much-followed Ramadan soaps, and devoting all airtime to cover the expected mass protests.

Several talk-show hosts opened urged the audience to take to the streets in massive numbers in response to the army chief’s call.