The Egyptians Against Coup (EAC) posted a statement on their Facebook page denouncing Egypt's security forces for causing the deaths of “unarmed civilians whose only crime was protesting the 7-3-2013 coup d’etat led by the Minister of Defense, Abdel Fattah al-Sisi.” 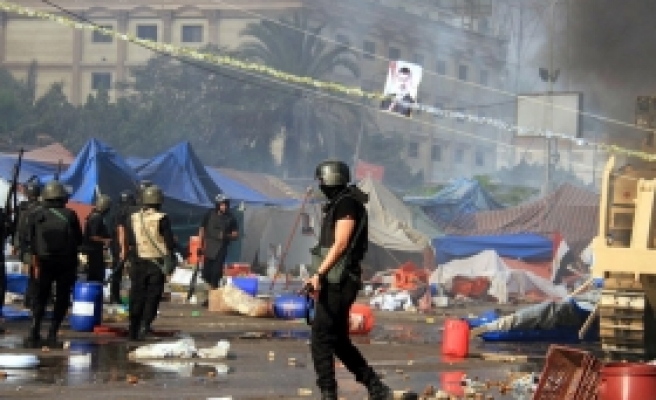 The Egyptians Against Coup (EAC) group posted a statement on Wednesday onto their Facebook page condemning the massacres committed on Wednesday by the Egyptian police force under military protection against the peaceful protestors in Rabaa and Nahda Squares, as well as throughout Egypt.

The EAC’s statement denounces the security forces for causing the deaths of “unarmed civilians whose only crime was protesting the 7-3-2013 coup d’etat led by the Minister of Defense, Abdel Fattah al-Sisi.” It also expresses their sympathy for the thousands for those who were injured and arrested.

Referring to the increase in attacks on Churches throughout Egypt, the EAC also condemned such events, suggetsing the need to make reasonable judgments regarding them.

The statement expressed that “ever since the beginning of the Egyptian revolution, attacks on Churches have proven to be masterminded by the Egyptian security to stir up unrest and justify their criminal measures.”

Urging that the tragedy of the massacre must be channeled into firm and tangible stances against Egypt’s coup leaders and the police force, the EAC’s statement urge “all governments to treat this horrible violation of the most basic of human rights as the catastrophe that it is.”

On their Facebook page, the group pledges to “continue their protests and sit-ins which the entire world has testifies to as peaceful, until the law and the democratically elected bodies are restored, and the criminals are punished.”

The EAC expresses their loyalty for the principles of Egypt’s January 25 revolution, and therefore their opposition to the military’s overthrow of elected President Mohamed Morsi, by explaining that the military;s takeover “quickly robbed us of our dreams! It brought back images of the not so far distant past” such as “images of oppression, enslavement, corruption, inequality, military brutality, martial law.”