Egyptian fficials prayed at the Air Force mosque, anti-coup protestors at the Rabaa and Nahda squares, and anti-Morsi protestors at Tahrir Square. 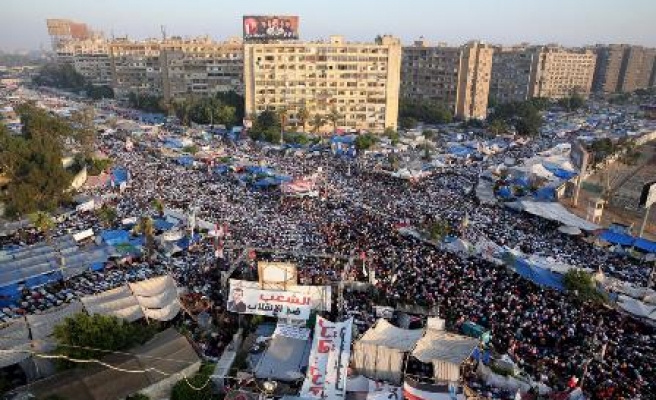 Political divisions between supporters and opponents of deposed President Mohamed Morsi are casting a shadow on courtyards dedicated for Eid prayers across Egypt.

This year, separate open spaces have been allocated for supporters and opponents of the ousted president to perform the prayers in different Egyptian governorates.

In the northern city of Alexandria, Morsi's supporters and opponents will pray in separate courtyards.

Though incumbent Mufti Shawqi Allam and Azhar Imam Ahmed al-Tayeb were present, they did not deliver the Eid sermons.

In Rabaa square, protesters delayed their Eid prayers to wait the arrival of pro-Morsi marches from across Cairo.

In Nahda Square in Giza, another protest site for Morsi supporters, worshippers performed their prayers on time.

Opponents of ousted President Mohamed Morsi performed the Eid prayers in the iconic Tahrir square on Thursday in a festive mood.

Worshippers used fireworks to "celebrate the first Eid after Morsi's ouster and the removal of the Muslim Brotherhood from power", opponents told Anadolu Agency.

The festive mood has swept the square even before the Eid prayers, with protesters preparing the iconic place for the prayers.

Cookies made special for the Islamic feast have been handed among worshippers and gifts given to children accompanying their families to the prayers.

Protesters volunteering to guard the square have beefed up security measures at entry points to the square.

On Wednesday, the protest movement Tamarod (Rebellion), which championed protests that led to Morsi's ouster, called on Egyptians to perform Eid prayers in Tahrir Square and outside Ittihadiya presidential palace.

The call comes "to reaffirm the continuation of the revolution and to reject international interference in Egypt's affairs," said a statement by the movement.

The invitation also aims to "prevent a specific faction from taking over the prayer courtyards," the statement added.

Morsi, Egypt's first democratically elected president, was ousted by the powerful army on July 3 after mass protests against his regime.

Since then, thousands of his supporters have been staging daily rallies and sit-ins to defend his democratic legitimacy and demand his reinstatement.

In the Nile Delta city of Damietta, Morsi opponents will pray in Al-Saah Square, the city's main square.

Charity efforts championed by the Muslim Brotherhood in Damietta ahead of the Islamic religious feast have vanished this year, with many of the group's leaders busy with ongoing pro-Morsi sit-ins in Cairo and Giza and repeated clashes between supporters and opponents in recent weeks.

In Sharqiya, the MB is expected to scrap its Eid festivals to avoid confrontations with rival groups, according to spokesman Ahmed Gaber al-Hajj.

In Menoufiya, the MB said it will continue its charitable activities "despite restrictions and threats".

MB spokesman told AA that courtyards allocated for Eid prayers have dropped from 400 to only 200 because of "restrictions".

In the canal city of Suez, the MB and opponents are competing to hold the Eid prayers in the Arbaeen Square, an iconic site in the city.

The MB has also called on supporters to gather for prayers at Hamza bin Abdel-Motaleb Mosque.

The canal city of Ismailia will have separate prayer courtyards for MB supporters and Salafists.

The MB appealed to residents to pray in its courtyards "to close the ranks of the Ummah, support legitimacy and reject the military coup".

The Salafist Call, for its part, has called for prayers in open spaces in the west of the city.

In the Upper Egypt governorate of Assiut, 82 courtyards have been allocated for Morsi supporters to perform Eid prayers.

But MB sources predicted a major drop in the numbers of worshippers this year because many supporters were camping out in Rabaa and Nahda squares to demand Morsi's reinstatement.

The Salafist Call, meanwhile, urged supporters to perform the prayers in its courtyards in the center of the governorate.

In Luxor, the MB plans mass Eid prayers in open spaces in the south and south-west of the city.

In Beni Sueif, Morsi supporters will perform prayers in Omar bin Abdel-Aziz Mosque while opponents will pray in al-Zeraeen square and Salafists in al-Nokrashi district.

Islamists will perform prayers in unified courtyards in the governorates of Minya, Sohag and Aswan.

In Gharbiya, residents said they will not pray in courtyards controlled by the Muslim Brotherhood or Salafists.

"Locals used to help Islamists prepare prayer plazas in past years, but the situation changed this year after their true face has been exposed," villager Sami al-Sherif told AA.

Hussein Morad, a resident of Kafr al-Zayat township, said the "MB members are welcomed as worshippers, but will not be allowed to organize the prayers or lead sermons".