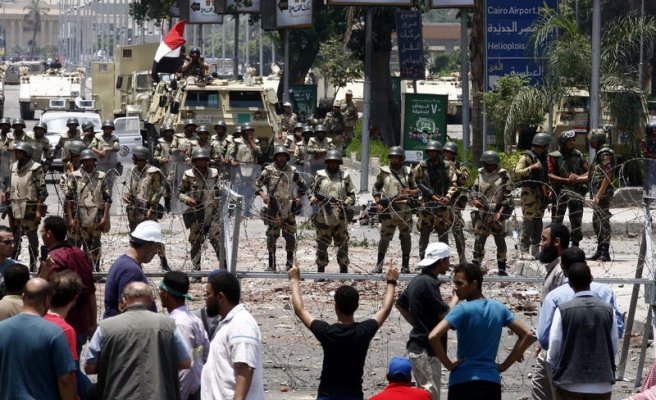 17:45 - Egyptian police and army spokespeople insisted that protesters attacked the vicinity of the Republican Guards headquarters and the army and police forces standing guard in the earlier hours of Monday, killing two policemen and one army officer.

"An armed group attacked areas near the Republican Guards compound and the troops standing guard using live ammunition and birdshots," the army spokesperson said in a joint televised press conference with his police counterpart.

"Others scaled a nearby building to fire bullets, Molotov and rocks at troops."

The police spokesperson said two policemen were killed in the attack and several others were injured.

16:53 - Army troops have closed roads leading to protest areas where thousands are camping to demand the return of ousted President Mohammad Morsi to power.

Witnesses said troops closed the 6th October Bridge leading to Nasr City, where thousands of Morsi's loyalists have been camping at Rabaa Al-Adawiya in eastern Cairo.

A bridge leading to Nahda square near the Cairo University in Giza has also been closed.

Army tanks were deployed at the entry points to the two squares.

The security measures came shortly after tens of Morsi supporters were killed outside the Republican Guards compound near Rabaa Al-Adawiya.

"They are refusing to leave in order not to be harassed by security forces," Mosaab Mohamed, a doctor with the field hospital set up by Morsi loyalists, told Anadolu Agency.

The supporters had taken refuge at the mosque after tens of fellow loyalists were killed outside the Republican Guards headquarters, where they have been staging a sit-in.

The army said that one officer was killed and several soldiers were wounded in an attempt by “a terrorist group” to storm the compound in the early hours of Monday.

15:48 - Turkey's Foreign Minister Ahmet Davutoglu has discussed the recent developments in Egypt with a number of his counterparts over the phone on Sunday and Monday.

According to diplomatic sources, Davutoglu's telephone diplomacy on Egypt has been continuing.

15:30 - A senior leader of the Muslim Brotherhood’s Freedom and Justice Party (FJP) has said some army soldiers refused orders to fire at protesters during the events outside the Republican Guards headquarters earlier Monday.

"This shows that orders were given to some officers to fire, but they refused," he told Anadolu Agency.

"We pin hopes on those honorable officers and the whole Egyptian people.”

Egypt to carry on work on new government despite violence

15:09 - Violent clashes that led to at least 42 deaths in front of Egypt's Republican Guard on Monday will not derail efforts to form a new interim government, presidency spokesman Ahmed Elmoslmany said.

"What happened will not stop steps to form a government or the (political) roadmap," he said.

15:00 - The Egyptian military is considering to impose emergency and curfew in the Cairo district of Nasr City and Nahda square in Giza, political sources told Anadolu Agency.

Thousands of loyalists of ousted president Mohammad Morsi have been camping in Rabaa Al-Adawiya square and outside the Republican Guards headquarters in the Nasr City district.

Loyalists of Morsi, Egypt's first democratically elected president, have also been camping out in Nahda square in the vicinity of Cairo University in Giza.

14:55 - Egypt's interim administration expressed "deep regret" for those killed in violence in Cairo on Monday, it said in a statement carried on the state news agency.

The statement said the deaths were the result of an attempt by protesters to storm the Republican Guard headquarters.

The transitional administration also said it had formed a judicial committee to investigate the events.

The statement called on protesters not to approach any military or "other vital installations".

Witnesses told Anadolu Agency that 5 tanks, 3 cannons and 4 armored vehicles carrying heavy machine guns, all belong to the Egyptian army, reached Gaza border on Monday morning. The mentioned vehicles were placed in front of the Brazil neighbourhood of the Rafah city in southern Gaza.

Following the army interference in Egypt, the Rafah crossing gate --Gaza’s only gateway to the outside world that surpasses Israel-- was shut.

14: 08 - The opposition National Salvation Font (NSF) has demanded urgent and fair probe into what happened outside the Republican Guards headquarters in the early hours of Monday.

“The Front condemns all acts of violence, demands an urgent and fair investigation into these tragic events and condemns any attempt to attack military facilities or army personnel,” the NSF said in a press statement.

“We offer our condolences to the families of citizens and army personnel killed.”

13:59 - Hamas has issued a message condemning the Egyptian army's opening fire on pro-Morsi demonstrators near the Republican Guard headquarters on Monday, killing at least 53 and wounding over 300.

The group based in Gaza said they were deeply saddened by the killings, which it described as a "massacre", and urged for an end to the bloodshed.

13:40 - Surviving supporters of ousted President Mohammad Morsi said gunshots and tear gas canisters rained on them during the Fajr prayers.

“When we heard the gunfire we left the prayers and saw army's armored vehicles approaching us and people in plain clothes stepping out and opening fire at the directives of army and police officers,” they told Anadolu Agency.

The survivors said that gun shooting and tear gas canisters began to ravage their sit-in at 4:00 a.m. while performing Fajr prayer.

"The shooting continued for more than one hour," they added.

"Bullets were primarily fired at the head and chest which claimed more than 53 lives."

13:38 - The Egyptian Armed Forces said one officer was killed and several soldiers were wounded in an attempt by “a terrorist group” to storm the Republican Guards headquarters in the early hours of Monday.

“An armed group tried to storm the Republican Guards headquarters and assault army and police forces, killing an officer and wounding several soldiers, “ the army said in a statement.

"About 200 gunmen were arrested with different caches of weapons and the other members of the group are being pursued.”

The statement gave no further details, including the number of gunmen killed.

The army warned against any acts of violence or sabotage against military installations or vital facilities in the country. “Those who violate these rules will put their lives at risk and will be dealt with decisively and in accordance with the law.”

13:20 - The Muslim Brotherhood said on Monday that the chief of the armed forces wanted to drive Egypt to the same fate as Syria after at least 42 people were killed in a shooting in Cairo.

Holding General Abdel Fattah al-Sisi responsible, the group described the shooting as a "horrible crime" in a statement posted on Facebook.

13:18 - Egyptian liberal politician Mohamed ElBaradei said the country was in "dire need" of reconciliation and condemned all violence on Monday after at least 42 people were killed in a Cairo protest that turned violent.

"Violence is not the approach no matter what its source, and it must be strongly condemned. I call for an immediate independent and transparent investigation. Egypt is in dire need of reconciliation," he wrote on Twitter.

12:51 - Eyewitnesses said 500 supporters of ousted president Mohammad Morsi are being besieged inside Al-Mostafa Mosque near the Republican Guards headquarters in eastern Cairo.

“Some 500 people, mostly women and children, are inside the mosque,” the eyewitnesses told Anadolu Agency. “They are appealing for help because anyone who leaves the mosque is either shot or arrested,” they claimed.

The army has not commented on such reports.

Sheikh of Al-Azhar who supports coup condemns the massacre

12:36  - Al-Azhar has condemned the killing of people outside the Republican Guards headquarters in the early hours of Monday.

"I strongly condemn what happened and the killings of people as reported by the media,” Al-Azhar Grand Imam Sheikh Ahmed El-Tayyeb said in a statement.

He urged Egyptian authorities to unveil the reality of what happened and keep the Egyptian people and the public opinion informed about the details of this “painful” incident.

In his message on social network site Twitter, Davutoglu said, "I strongly condemn the massacre, taken place during the morning prayer, on behalf of basic human values we stand up for. We wait for our Egyptian brothers and sisters to claim democracy and free will despite the provocations."

Davutoglu underlined that a political normalization process, respectful to people's will, should start, and condoled with Egyptian people. He said, "Egypt is the hope of rising democracy demand in the Middle East and Turkey will always be in solidarity with the Egyptian society."

11:14 - Pressure built toward press in Egypt after Egyptian army opened fire on pro-Morsi protesters in front of Republican Guards Headquarters in Cairo.

Egyptian army blocked the press members to leave their hotels or approach the area to prevent the incident spreading to world public opinion.

Foreign journalists insisting on reaching in front of Republican Guards Headquarters were attacked by the group called "Baltaji" while a foreign cameraman was allegedly killed.

11:06 - The Muslim Brotherhood called on Egyptians to rise up against those who "want to steal" the revolution, a statement by its political wing said on Monday, after the Health Ministry said 42 people were killed in shooting outside the Cairo headquarters of the Republican Guard.

"(The Freedom and Justice Party) calls on the great Egyptian people to rise up against those who want to steal their revolution with tanks and armoured vehicles, even over the dead bodies of the people," a statement on the party's Facebook page said.

Death toll rises to 52 in fire opened on protestors

11:04 - Freedom and Justice Party (FJP) announced on Monday death toll rose to 52 in the attacks in front of the Republican Guards Headquarters in Egypt.

FJP stated death toll rose to 52, including 5 children, in the fire opened on pro‑Morsi protesters in Cairo.

Meanwhile, people gathered in front of the Republican Guards Headquarter in Rabia al-Adewiyya Square and lamented for the dead.

10:47 - The Salafist Nour Party has decided to withdraw from the political process under the roadmap announced by the military last week in reaction to the killing of at least 35 people outside the Republican Gurads headquarters in the early hours of Monday.

“Nour Party withdraws completely from the political process under the so-called roadmap of Abdel Fatah Sisi,” said the party leader.

“(We) will not deal with Adly Mansour, the head of the constitution court – as interim president.”

42 killed in fire opened on protesters

07:43 - In a fire opened on pro-Morsi protesters Monday, 42 people were killed and more than 322 others were wounded in front of Republican Guards Headquarters in Cairo.

Egyptian army said, a commander was killed and nearly 40 soldiers were wounded in clashes between protesters and army forces when protesters attempted to raid Republican Guards Headquarters.