Trouble has been reported in 9 of Egypt’s 27 provinces, including the country's second largest city Alexandria, and the Nile tourist destinations of Luxor and Aswan. 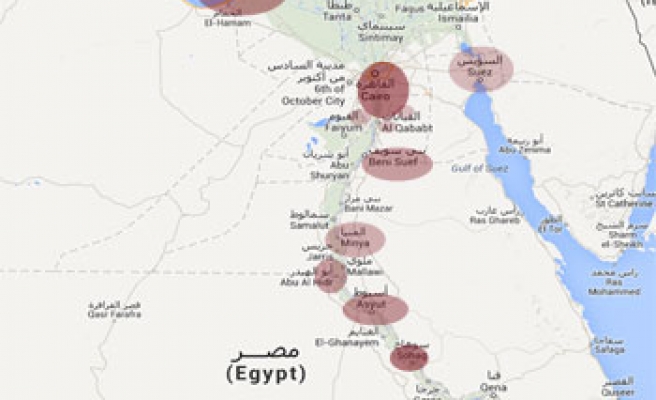 The clearance operation in Egypt has sparked protests around the country. Police are fighting running battles with Morsi supporters in many parts of Egypt.

Security forces now have control of the smaller camp at Al Nahda located in Cairo's Giza governorate. However, the police and the Egyptian Army are still trying to secure Raba'a, where bloody clashes are ongoing.

Clashes are also continuing in Cairo’s Mostafa Mahmoud Square and the neighborhood of Haram.

Trouble has been reported in 9 of Egypt’s 27 provinces, including the country's second largest city Alexandria, and the Nile tourist destinations of Luxor and Aswan.

In the canal city of Suez, dozens of Morsi supporters assembled outsize the Hamza Hospital and blocked Nasser Road with burning tires.

In the Nile Delta province of Sharqiya, dozens of angry demonstrators cut off a main road to protest the killings.

In Upper Egypt, protesters surrounded the governor's office in Aswan, while roads were reportedly blocked in the Luxor and Sohag provinces.

Angry demonstrators in Beni Sueif torched two cars as they prepared for a protest against the police assault on Morsi supporters in Cairo and Giza.

In the coastal city of Alexandria, a number of Morsi supporters converged on a main square to protest the deadly dispersal of the two Cairo sit-ins.