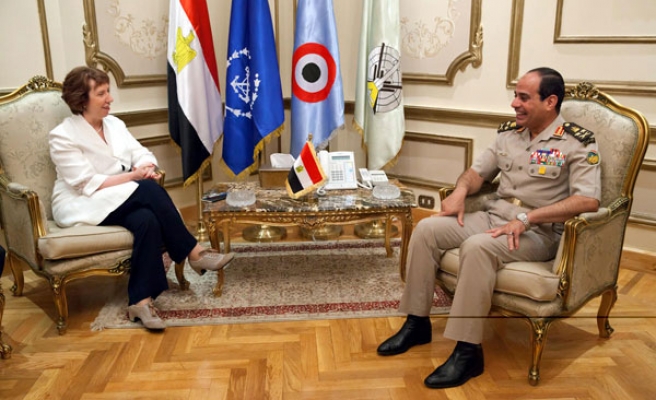 Egypt's major anti-coup alliance has decried a recent visit by European Union foreign policy chief Catherine Ashton, saying the trip showed support for what it described as the "military coup".

"It is clear from Ashton's visit that the E.U. has decided to support the coup roadmap," Magdi Qorqor, spokesman of the National Alliance for the Defense of Legitimacy, told Anadolu Agency.

"She [Ashton] had come here to discuss the forthcoming presidential election," he added.

Egyptians are set to elect a new president on May 26-27 in the second phase of a transitional roadmap, which should be completed later this year with the holding of parliamentary polls.

The roadmap was imposed by the military following last summer's ouster of elected president Mohamed Morsi.

Supporters of the ousted president describe his removal from power as a "military coup", while opponents term it a "military-backed revolution".

Ashton, however, had not met with any representatives of the alliance, the main support bloc of ousted president Mohamed Morsi.

Qorqor said that the E.U. foreign policy chief had tried during her previous visits to Egypt to pressure the alliance to engage in the transitional roadmap.

"This time, she had nothing to offer," he said.

The European Union said on Thursday that the E.U. will send a team of observers to follow up Egypt's upcoming presidential elections.

Ashton's visit to Cairo was her fourth to Egypt since Morsi's overthrow by the military last July.

During a visit last summer, Ashton had met Morsi himself at an undisclosed location, where he had been taken in the wake of his ouster.