The foreign minister stressed that Egypt still favours a political settlement and hopes that can be achieved through the Geneva 2 meeting or any other political way. 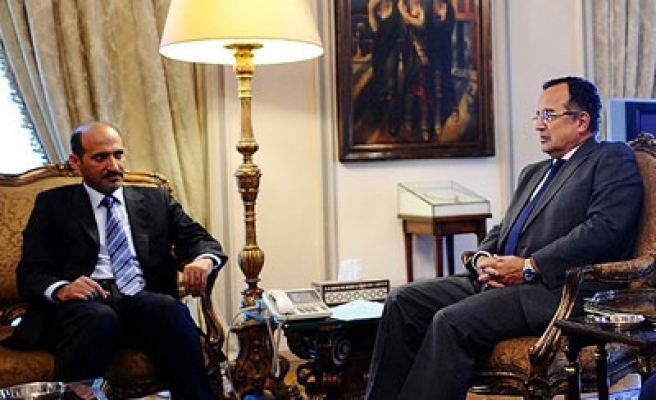 Egyptian Foreign Minister Nabil Fahmi reiterated on Sunday his country's support to the Syrian revolution, asserting that new measures on the entrance of Syrians is "temporary".

"Egypt has vehemently, and without any hesitation, condemned the bloodshed in Syria," he added.

"We will continue to support the Syrian revolution until a democratic Syria that meets the aspirations of the Syrian people emerges."

The foreign minister stressed that Egypt still favours a political settlement and hopes that can be achieved through the Geneva 2 meeting or any other political way.

On the issue of possible participation by Syrian individuals in the activities of the Muslim Brotherhood, Fahmi asserted that such actions do not represent the Syrian people or the Syrian opposition.

"These will be dealt with as individual cases."

Jarba, the leader of the Syrian National Coalition, said the foreign minister has told him that the new entrance measures imposed on Syrians coming to Egypt were temporary.

"The foreign minister has confirmed this and said this situation will end with Ramadan."

Syrians are now required to obtain visa and a security clearance before arriving in the country.

"The foreign minister made clear these measures were imposed on Syrians and other nationalities as well," said the Syrian opposition leader.

"He made clear the measures were not targeting Syrians."

In a press release following the press conference, Egyptian Foreign Ministry spokesman Badr Abdel-Aati confirmed that the foreign minister had told Jarba that the entrance measures were "temporary in their nature" and linked to the situation in the country.