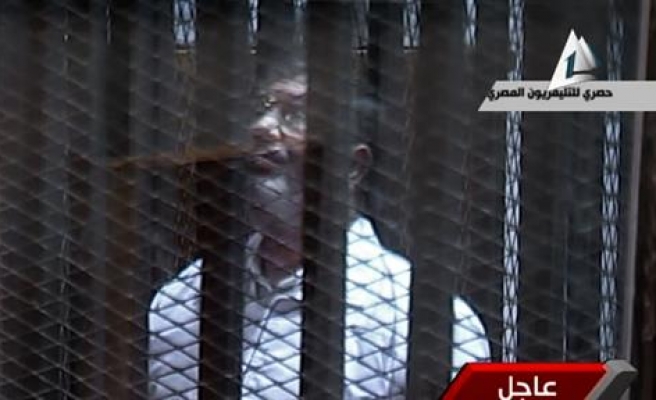 World Bulletin / News Desk
An Egyptian court has set February 15 to begin the trial of ousted President Mohamed Morsi and ten others accused of spying for and leaking confidential documents to Qatar.

The Egyptian authorities accuse Morsi and the other defendants of leaking confidential documents concerning Egyptian national security to the Qatari intelligence apparatus and the Qatari-owned Al Jazeera news network with the aim of "harming Egypt's military and diplomatic status… and national interests."

The documents allegedly included classified information on Egypt's army, military dispositions and armaments, as well as additional information on the country's domestic and foreign policies, the court asserted.

Last September, prosecutors said that Sablan had traveled to Doha – where he met with the head of Al Jazeera's news department, Ibrahim Hilal, and a Qatari intelligence official whose name was not disclosed – to whom he promised to deliver the documents in exchange for $1 million.

The statement did not say whether the documents were ever actually delivered to the Qataris.

Morsi, Egypt's first democratically elected leader, was ousted by the military in July of 2013 – after only one year in office – following protests against his presidency.

February's trial will be the fourth for Morsi, who also faces separate charges of inciting the murder of opposition demonstrators; spying for Hamas, Hezbollah and Iran; and breaking out of jail.

Morsi, like his co-defendants, says all the charges against him are politically driven.

Relations between Cairo and Doha worsened markedly when the Egyptian military – headed at the time by Abdel-Fattah al-Sisi, Egypt's current president – ousted Morsi.

Egypt's army-backed authorities accuse Doha of interfering in the country's affairs, citing heavy criticism by most guests featured on Al Jazeera and its affiliate, Al Jazeera Mubasher Misr, which before its closure last month had been devoted exclusively to covering events in Egypt.

They also accuse Qatar of supporting the Muslim Brotherhood, the group that propelled Morsi to power in Egypt's first-ever free presidential poll in 2012.

Relations, however, began to improve between Egypt and Qatar in recent weeks amid mediation efforts by Arab Gulf states.