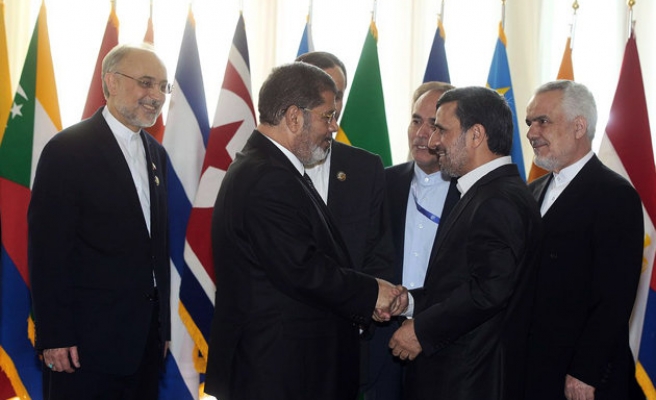 Egypt called on Thursday for intervention to halt bloodshed in Syria, telling a meeting of 120 nations it was their duty to stand against the "oppressive regime" of Bashar al-Assad, prompting a Syrian walkout.

President Mohamed Mursi, elected two months ago after a popular uprising toppled Egypt's long-standing leader Hosni Mubarak, said Assad had lost legitimacy in his fight to crush a 17-month-old revolt in which 20,000 people have been killed.

Mursi's scathing speech to a summit of non-aligned leaders, hosted by Iran, prompted Syria's foreign minister to accuse the leader of inciting further bloodshed in Syria.

"The bloodshed in Syria is our responsibility on all our shoulders and we have to know that the bloodshed cannot stop without effective interference from all of us," Mursi said.

"We all have to announce our full solidarity with the struggle of those seeking freedom and justice in Syria, and translate this sympathy into a clear political vision that supports a peaceful transition to a democratic system of rule that reflects the demands of the Syrian people for freedom."

The political broadside against the Syrian president came as rebels said they shot down a fighter plane in northern Syria, where his air force has been bombarding opposition-held towns in a fierce counter-offensive against insurgents.

It was the latest strike by Assad's foes on the air power he has increasingly relied on to crush the uprising. Rebels said this week they attacked a northern military air base and shot down a helicopter that was bombarding a district of Damascus.

Assad, in his first television interview since rebels took their fight into the heart of Damascus and the country's biggest city, Aleppo, said on Wednesday his fight to put down the uprising was going well but needed more time.

"Everyone wants this battle to be completed in days or weeks but this isn't reasonable, because we are in the middle of a regional and international struggle and it needs time to be resolved," he said.

Mainly peaceful protests were met with force by Assad's military, and the uprising has degenerated into a civil war with sectarian overtones and regional dimensions. The mainly Sunni Muslim rebels are backed by regional Sunni powers, particularly Gulf Arab states and Turkey.

The Syrian Martyrs Brigade said on Thursday it brought down a plane near the town of al-Thayabiya. Video footage on Al Arabiya television showed what appeared to be smoke in the sky and a person parachuting down. An army helicopter hovered over the area, apparently in search of the pilot.

"The brigade has started targeting the regime's air assets, including military airports," a member of the group said from Idlib, declining to give further details.

As well as targeting rebels, Assad's jets and artillery have also struck at least 10 bakeries in Aleppo province in the last three weeks, killing dozens of people as they waited in line to buy bread, the U.S.-based Human Rights Watch said.

It said the attacks were either deliberate or done without care to avoid the hundred of civilians forced to queue outside a dwindling number of bakeries in Syria's biggest city, a front line in the civil war.

One attack two weeks ago killed around 60 people and wounded more than 70, it said.

The fighting around Aleppo, Damascus and the southern province of Deraa, where protests against Assad first erupted in March 2011, has prompted waves of refugees to flood into neighbouring Turkey and Jordan.

Turkey urged the United Nations to protect displaced Syrians inside their own country, to take the pressure off its crowded refugee camps, and France said it was studying the issue of buffer zones in Syria, an idea Assad dismissed as unrealistic.