Erdogan says he refused to talk to Egypt's ElBaradei

Prime Minister Erdoğan has said he refused to speak with Mohamed ElBaradei due to the fact that ElBaradei was installed as the Egyptian vice president in a cabinet formed by a military junta. 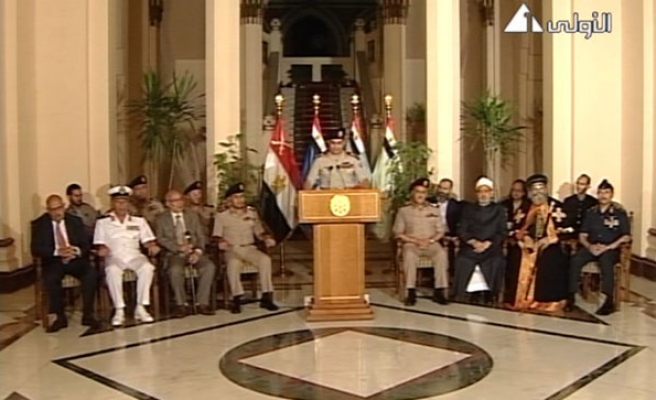 Prime Minister Recep Tayyip Erdoğan has said he refused to speak with Mohamed ElBaradei, who was installed as the Egyptian vice president in a cabinet formed by the military after a coup, saying his refusal was due to the fact that ElBaradei was brought to the post by a military junta.

Some media reports had recently said the Turkish prime minister rejected a request by ElBaradei for a meeting. Sources from Prime Ministry had denied the reports, saying, “We have no such information.”

Speaking on Wednesday at a fast-breaking iftar dinner organized by his ruling Justice and Development Party's (AK Party) İstanbul branch, Erdoğan said he had received a letter from the new Egyptian administration which expressed displeasure over Erdoğan's remarks on the coup. Erdoğan noted that the letter, sent to him by ElBaradei, said they could also talk on the phone “if necessary.”

The prime minister responded to ElBaradei's letter during the İstanbul iftar dinner, saying: “[First of all,] why would I ever talk to you? You are not an elected [vice president]. You are a [vice president] appointed by a coup administration.” He also called the formation of a cabinet by the military a “tragedy,” saying this had no place in democracies.

Erdoğan also lashed out at the West once again for not “having the spine” to condemn the recent developments in the most populous Arab state.

"If ElBaradei had been elected, I would have used the same words that I use for Morsi today. But he could not get elected, Morsi was elected with 52 percent," Erdoğan said in his continuing criticism of the coup that toppled the first democratically elected president of Egypt.

Erdoğan also touched upon supporters of the deposed Egyptian leader who have been continuing sit-ins in Cairo and other major cities to protest the coup. "They started asking questions like ‘Where is my vote?' Egyptians did not surrender to others imposing their will on them. They went out into the streets in unison and launched a noble fight," the Turkish prime minister said.

He added that it was not easy to get away with a coup and silence the will of people today. Erdoğan said the military tried to “legitimize” the coup in Egypt by directing people to a square, but this plan failed as anti-coup protesters also went out into the streets and Rabaa al-Adawiya Square.

Turkey's denunciation of the military intervention in Cairo as an “unacceptable coup” was seen by Egyptians as one of the strongest reactions overseas to the event.

In contrast to the US and some European bodies, which have refrained from using the word “coup,” Ankara has found itself alone in its strong condemnation of the Egyptian army's ousting of Morsi and in calling on the military to restore the democratically elected government.

Meanwhile, the Turkish Foreign Ministry has denied a claim made during a television program in Egypt on Thursday that said Egyptian officials had confiscated a Turkish container full of "sonic weapons convertible to guns."

The ministry, in a statement on Thursday, said such claims should immediately be investigated in detail. Turkey asked Egyptian officials to send them the so-called concrete evidence that was found in the container. The statement added that Turkey condemns all kinds of violence in Egypt and does not accept violence as the answer.

Officials in Egypt denied such a request and in a statement this morning have said Dr. Elbaradei the vice president of Egypt has not contacted Erdogan!