Erdogan says Putin may 'give up' on Assad

'Putin's current attitude toward Syria is more encouraging than before,' Erdogan said 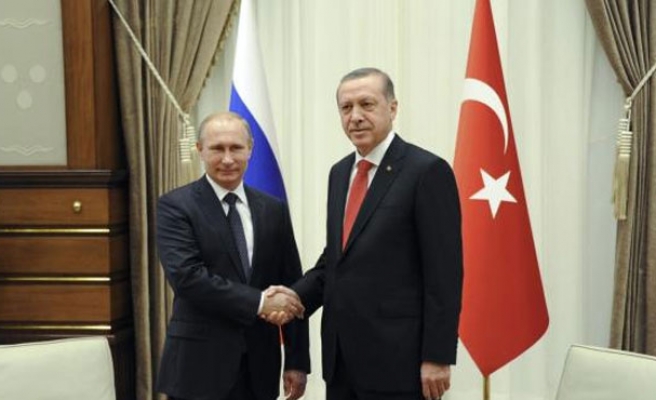 Russian President Vladimir Putin is having a change of heart on the Kremlin's wholehearted support for Syrian leader Bashar al-Assad and may "give up on him" in the future, Turkish President Recep Tayyip Erdogan was quoted as saying Monday.

When asked if Putin could be persuaded not to support Assad, Erdogan said he saw his counterpart as "more positive" during a face-to-face meeting in the Azerbaijani capital of Baku in June and in subsequent telephone talks.

"Putin's current attitude toward Syria is more encouraging than before," Erdogan told a group of journalists on his presidential jet as he returned from a trip to Asia.

"He is no longer of the opinion that Russia will support Assad to the end. I believe he can give up Assad," he was quoted as saying by the Daily Sabah and Sabah dailies.

Turkey and Russia stand on opposing sides over the crisis in Syria, with Ankara one of the fiercest critics of Assad and Moscow one of his few remaining allies.

Putin and Erdogan last met in Baku on June 13 during talks on the sidelines of the European Games that were held in the Azerbaijani capital.

Relations between Turkey and Russia have become increasingly robust in recent months, with Russia's relations with the West at a post-Cold War era low and Turkey's bid to join the European Union at a standstill.

Analysts say that Moscow and Ankara have managed to compartmentalise disputes over the Syria conflict and Russia's annexation of Ukraine to work for wider ties.

Notably, Russia and Turkey have agreed to begin work on a new pipeline underneath the Black Sea. But reports in recent days have suggested the Turk Stream project has hit trouble due to a dispute over the price Turkey should pay for Russian gas.

Erdogan's comments come as Ankara wages a two-pronged "anti-terror" offensive against jihadists in Syria and Kurdish militants based in northern Iraq after a wave of attacks inside Turkey.