EU diplomatic chief, Iranian Foreign Minister 'underlined the need to bring the war in Syria, which has caused so much suffering, to an end' 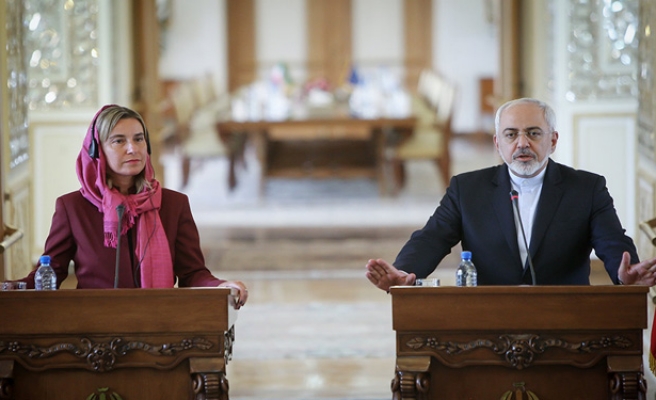 The European Union's diplomatic chief and Iran's foreign minister met Saturday in New York to discuss the war in Syria ahead of a UN push for peace talks.

A key ally of President Bashar al-Assad, Iran has been kept out of UN diplomatic efforts to end the four-year war that has killed more than 240,000 people.

EU diplomatic chief Federica Mogherini and Iranian Foreign Minister Mohammad Javad Zarif "underlined the need to bring the war in Syria, which has caused so much suffering, to an end," said an EU statement.

"They expressed their readiness to cooperate within UN-led efforts and exchanged views on how to contribute to that end," it added.

US Secretary of State John Kerry is also due to meet with Zarif on Saturday in New York as is Russian Foreign Minister Sergei Lavrov on Monday.

The United Nations had hoped to get a new round of peace talks off the ground this month, but Russia's military build-up in Syria threw a spanner in the works.

The UN peace talks led by envoy Staffan de Mistura would be coupled with the creation of an international contact group that would for the first time include Iran, but Saudi Arabia opposes the plan.

A flurry of meetings on the sidelines of this year's UN General Assembly meeting will seek to forge a new consensus on the way forward in Syria where fighting has driven four million people from their homes.

US President Barack Obama will sit down with Russian leader Vladimir Putin on Monday for talks that could prove crucial in charting the way forward.

Russia -- which along with Iran is one of the few remaining backers of the Damascus regime -- has sent troops and warplanes to Syria along with fresh arms supplies to Assad's forces.

Moscow wants the West and Arab countries to cooperate in the fight against the ISIL that have seized swaths of territory in Iraq and Syria.

But the West maintains that there can be no cooperation with the Assad regime, which they argue has killed more civilians in the war than the ISIL.